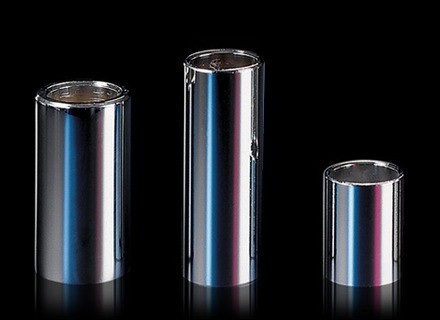 Dunlop Chromed Steel Slide
3
This was my second slide I ever tried out. I had previous to this used the Dunlop glass variety of slide. I did like that slide however I found myself to be careless and decided to try something a bit less breakable. At the time I was inexperienced and found out quickly how different a sound can be made depending on the material.

Let me say that I did enjoy the fit of this slide to that of the glass slide. It seemed more stable on my finger and was easier to use. I am a bit of a sweaty guy so the glass always felt like I was going to loose it. Well the fit was about the only thing I did like about this slide.

I found that unlike the glass variety the metal slide was very thin and harsh sounding. It produced way too much high end response for my liking. I had written a few parts into my music at that time for the slide but the metal slide was actually unbearable tone wise to my ears. I know that the sound it produces has a valid place in music but I really wanted the warmer sound that the glass produced. I tried tweaking some settings to give it a chance but soon realized it was not worth the effort and replaced the glass slide promising myself to just be a bit more careful with the new one.

I did not have an acoustic guitar at that time in my life and I have never purchased another one of these slides. I feel however that with a warmer sounding acoustic that the metal slide might actually be a good complimentary piece. I may have simply applied it to the wrong instrument but it did nothing for me on electric guitar.
Did you find this review helpful?yesno
»

Dunlop Chromed Steel Slide
4
This is a pretty solid slide for electric and acoustic guitars. I have never tried it with a lap steel, as I don't really play those. I'm not sure you even would play one of those with this type of slide. Anyway, this is the slide that brought me back to glass. I've had many glass slides shatter on me throughout the years, and eventually got really frustrated with it. So I decided to cave and buy the metal. Then I stopped playing slide because I didn't like my tone. Therefore, I think that I prefer glass slides in general. However, sometimes, they can be weak and unforgiving. Not this one. This slide has one of the warmer, clearer tones that I've encountered. It tends to avoid highlighting the abrasive signals that sometimes get amplified with slide playing. I tend to use it more for my acoustic guitar, which sounds terrible with a metal slide. However, the electric guitars I've tried it with sound great, though I get frustrated from having to reset the action sometimes. It's just great for highlighting the middle range as opposed to the higher range. Since I use guitars that are generally pretty bright, I think that this helps balance it out a little better. I doubt anyone would want a slide that emphasizes the highs more than this one. It also fits me well, and I've never heard anyone encounter a problem with the comfort ability of it. Overall, I prefer it to most glass slides, and I'm fortunate enough to have not broken it yet. Even if I do though, I wouldn't mind, considering that it's not that expensive to get replaced. If you want a good glass slide, this is one of the better ones I've found that weren't custom-made or unnecessarily expensive. But still I recommend these to anyone.
Did you find this review helpful?yesno
»

Tin-Man's review (This content has been automatically translated from French)" A Must In Acoustics!"

This is my first Bottleneck.

Excellent on acoustic.
I do not like the electrical noise too.
So I purchased a glass bottleneck for power.

It's raw crude is solid and indestructible, but as said previous opinion, it tends to rust inside (without yet having sweaty hands ...)

If someone has a trick to avoid this also, I'm interested ...

This is a classic, there's not even the question of whether we remake this choice ...

However pay attention to when purchasing diameter, y'en express for big fingers ...

Tionline's review (This content has been automatically translated from French)

Dunlop Chromed Steel Slide
5
has been 5 years since I use this bottleneck, and it still looks as new. That's the advantage of metal.
However, if it is solid and has lasted a lifetime, even when the sound is much more aggressive and ... mtallique with a glass bottleneck.
N'tant not a specialist in this type of game, I'm perfectly happy and if I buy a bottleneck, it would suit me perfectly.

Did you find this review helpful?yesno
»
Read the 10 user reviews on the Dunlop Chromed Steel Slide »