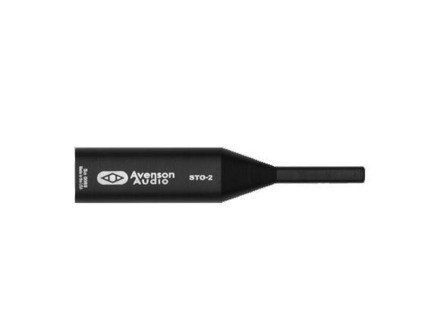 Avenson Audio STO-2
5
This Omni Directional mic come in pairs and are great for instruments and will give your instrument recordings a very natural sound. Actually one of the best natural sounds you will hear from a mic that’s under 1000 dollars. When the mic first came out I think it was around 600 for the pair and they come in a nice wooden box with a fancy interior. The box itself looks like it cost 100 bucks, but the mics will do all of the talking you wont need the box anymore after you hear them. You can record some pianos with the STO 2 and play them back in a whole different set up in some headphones or regular speakers for that matter and it will feel like you are really sitting in front of someone playing the piano for you. They are just that good of a mic, I have seen people use this mic when creating 3d sound for certain projects. Just because of how clear the recording will be to start with then using a 3d plug in they will position the instrument in virtual space and it will really give you a 3d experience if your speakers that your listening to can handle it. But even if you arent using 3d sound they will still give you a natural effect of actually being there which is still like a 3d sound.

These mics are worth every penny spent, and you will have to pay more than 500 dollars for them because they are just that good, don’t think you can get them much cheaper than that. They hold their value and are still being purchased even though they have been out for a while. I actually think they are still producing them which could be the reason that the price hasn’t dropped that much if at all.

Avenson Audio STO-2
5
The Avenson Audio STO-2 is a set of two unique microphone that have an outstanding overall sound quality. The microphones are pressure transducer based, which is to emulate the way the human ears pick up sound. They've got an omni directional pick up pattern, with a frequency response ranging from 20 Hz to 20 kHz, which is also just like the human ear. The mics have a unique diaphragm to them, which is very small, as are the microphones in general. The mics comes with a hard shell case that both of them fit in, as well as a set of specialized microphone clips.

The Avenson Audio STO-2's are perfect for picking up any sound in a stereo pair. I don't know about using each of them individually, as I've only used them as a stereo pair, which of course, is the way that they were intended to be used. The applications that I've used them for include for recording a drum kit (using these are overheads), and for recording a grand piano. For both of these applications, the sound came in crystal clear and totally natural. In fact, the STO-2's are about as natural sounding as most of the microphones I've used. They sounded best to me for recording the piano, as you could really hear every single detail in the sound. While they worked extremely well as drum overheads as well, I don't think I'd replace them using Neumann KM 184's as drum overheads given the choice. The STO-2's are definitely a professional's set of microphones, but the price certainly indicates otherwise! Getting two microphones of this quality, at this price, is really the definition of bang for your buck. Whether you're a professional or a home studio owner, the Avenson Audio STO-2's are a great addition to any microphone collection.
Did you find this review helpful?yesno
»

Avenson Audio STO-2
5
Electret microphones sold in pairs. Curve RESPONSE flat 20 Hz 20 kHz (20 kHz -1 dB). They would use the same sensor as the Earthworks microphones (see forum on the website of Audio Addict, the franais importer who sells online). 48 V supply (6 mA). The sensitivity of 5 mV / Pa is lower than that of capacitor microphones (10 30 mV / Pa) and the self-noise, 28 dBA lev more than these same condenser microphones (5 20 dBA). In DPIT these figures, I have not noticed more audible blast with these pickups as with Oktava MK-012, once branchs on my Pramp Focusrite.
The sensitivity ad is pessimistic: the results of individual measures included on a label on the bottom of the beautiful wooden bote are suprieures 7 mV / Pa. In practice, for a same rglage gain of Pramp, the level of a recording made with the Avenson differs by less than 1 dB from that of a recording made with the Oktava.

Compared Rode NT5 or the Oktava MK012-I am struck by the truth of stamp recorded my piano. This is prcis and natural.
Did you find this review helpful?yesno
»

friseruse's review (This content has been automatically translated from French)" have"

They are excellent pickups, especially for the price! Try as overheads on drums, they provide space and realism. Even on a bass drum (yes!) On a snare drum on an acoustic guitar ...
Weakness: omni directivity their forces have a good sound. And even if it is true that the rcupre "repisse," it is not so dtimbre easily manageable.
Strength: everything a couple omni can do. Moreover, as there is no effect of proximity it is possible to place the microphones needed very prs sources. On the bass drum for example, there will be a very serious natural APRS same equalizer.
They may be a bit below the Earthworks and DPA, but they are 5 times cheaper! And again the VAS is excellent.