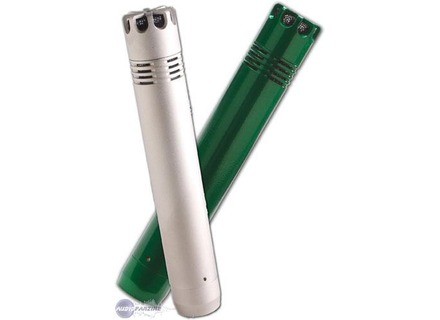 Joemeek JM27
3
The JM27 by Joemeek is a small diaphragm condenser microphone and it has a fixed cardioid pattern. This microphone can be purchased brand new for about 140 US dollars online. The price for this microphone is a steal because it is so cheap. But at the same time, its not a higher end microphone and you will get what you pay for. This is one of the only microphones that I have heard from Joemeek, and at best this is an overall average cheaper microphone. The JM27 does have a smooth response though for such a “low end” microphone.

The JM27 is made out of brass and has a nice heavy feel to it. Its very indestructible and rugged. You will not have to worry about damaging it if you drop it. The Polar pattern is 12dB, 300-3000Hz. Joemeek says that this microphone will sound great with almost any instrument including drums. They advertised that using it as a over head drum microphone will work great, that was a big mistake on my part. I should have known better than to go with a 140 dollar microphone from a company that doesn’t really put out many microphones. This is not a drum microphone and I don’t know why they said it could be used for one. When used with an acoustic instrument the quality is decent at best and not so good for brass instruments. I immediately got rid of this microphone and tried about the JM37 instead of the JM27. The JM27 is a lot cheaper than the JM37 , but the JM37 will give you a better sound, and it has a larger diaphragm. The JM37 cost about 100 dollars more , but its money well spent. If you are looking into getting the JM27 just save up and wait till you can afford the JM37. You will thank me later.

Joemeek JM27
The Joemeek JM27 is a small diaphragm condenser microphone that comes from an unlikely source.  Mostly known for their signal processing gear, Joemeek has a small line of microphones with the JM27 being on of them.  The mic has a cardioid polar pattern pick up and picks up signals ranging from 30 Hz to 20 KHz.  It has a pretty sturdy casing and is overall built pretty decently for such a cheap mic.

I first used the Joemeek JM27 only a number of months ago as I was curious to see what a Joemeek microphone would sound like, especially at such a cheap price.  I was pleasantly surprised to find that I actually liked the sound of the JM27 and that it worked well in a number of different situations.  Don’t get me wrong, this isn’t really a suitable professional’s mic, but for home studio owners looking to get a good deal on a small diaphragm condenser, the JM27 does the trick.  I have used these microphones as drum overheads, as well as for acoustic guitar and I found that they worked pretty well in both situations.  It will also work well with other acoustic stringed instruments like mandolin, as well as for picking up the high signals in acoustic piano.  I can’t say that I would recommend them to anyone other than a home studio owner as the sound quality certainly isn’t up to par with some other professional small diaphragm condensers, but the JM27s will do the trick for budget and smaller studios.  However, if you are looking for top quality tone for drum overheads or another application, I would recommend spending a bit more money to get pair of Rode NT5s as they are pretty great sounding for a good price.  All in all, the Joemeek JM27s are surprisingly a very good deal.

loris.bernot's review (This content has been automatically translated from French)

Joemeek JM27
5
Static pad and no other selectors.
Pad: 130dB cash it, so the need is relative
cut down: it's not a vocal mic so the interest of cutting down is less, if there are too many serious this is probably the source ...

- Use for 3 months.
- Provide for the purchase of a clip ...
- Diaphragm sized, go anywhere, very good on guitar amp (1 m), small percussions booster, battery scrap metal or overhead, acoustic guitar, so good on voice, on the brass JM make them a bit aggressive but it also depends on the style of music to rock because it can be an advantage.
- Value for money very well for the price we really have a microphone that holds water and allows you to record very correct
- I already remade that choice since I four ale, for the most interresting price is to buy a couple.
- A microphone 100th, not 3000th, ca does not sound like a Neumann or Schoeps, do not mix everything up ...

nitsuko's review (This content has been automatically translated from French)

I bought the pack with two microphones a few months ago for 169 euros. I was advised to buy them because they sounded good for string instruments. Well, I can not really say I'm happy, I think they are too bright in sound, they remain in the medium, I find that the dynamics is not terrible, and they are not suitable for vocals. After maybe it's my console or my preamps that are not terrible. But it's true that for the price, we can not ask for excellence! Anyway, for those who do not have much money, it can. Next time I would try the microphones at The T-Bone.

Did you find this review helpful?yesno
»
Read the 5 user reviews on the Joemeek JM27 »