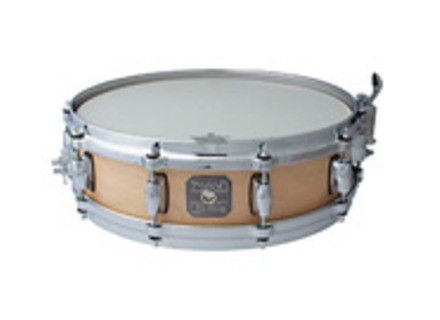 tchacboum's review (This content has been automatically translated from French)

Chad Smith is the driest and least snapping and roundness.

The Gretsch maple is warmer and more versatile in my opinion (probably benefit the maple on the metal) but know if we slam the cheek a little tense.

To be honest, the skin of the gretsch (an Evans G1 coated) was new, that of chad smith had not already been mistyped. It has played a bit of the comparison but not completely upsets the game.

For rim shots and cross sticks, the Gretsch wins hands down thanks to these circles molded face stamped circles of chad smith.

I made my first repeat with the little news today, in a pop rock: that happiness. Well defined, the rim shots of madness and its very clear on the cross stick.

I made small turning the brushes with jazz bassist to see: the also very good.

In the end, I would resume the same. Clearly one of the best snare I've had in my hands (I am an amateur drummer so I never had the opportunity to play on the high-end pro equipment but we are here in the semi-pro that sounds really .. nothing to do with the snare input / mid-range type 300x sonor, pearl export, Yamaha Stage Custom, and other tama rockstar ... and to finish much better than chad smith in my opinion)
Did you find this review helpful?yesno
»

staier's review (This content has been automatically translated from French)

Gretsch 14x5 Maple
4
I confirm! I had this snare, used nine state for six months.
the trs is a particularity good sensitivity to the bearings is great, circles pan on a crate is not too CHRE apprciable.
I have several boxes in addition to this, as stocky, birch, copper, aluminum,
Gretsch is the trs good quality and value for price is super good since I got it secondhand!
If I had to redo the choice without hsitation, trs good snare end.
Did you find this review helpful?yesno
»

llados's review (This content has been automatically translated from French)

Gretsch 14x5 Maple
4
I use it for 3 days. Ds that I tried to shop, I thought it sounded good. I compared a Artwood and a black panther. Well, it is best (my taste).
It is prcise, clear, powerful without being aggressive, sensitive and has a beautiful grain.
In short, it is a good CC trs. It's really high-end! CHRE but less than the high end, so good value qualitprix trs. It was a little too harmonics, but they can be easily mastered with a little piece of gaffer (you must not cut them too either).
And so, yes, I would do this choice. At this price, there's no better
Did you find this review helpful?yesno
»