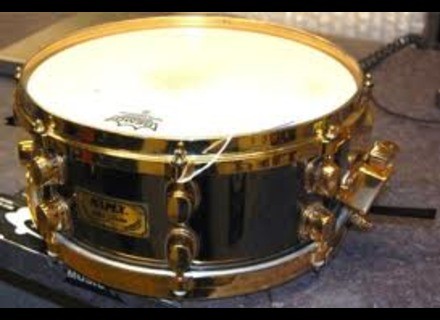 Mapex Brass Master Snare
5
This is a snare that I was not expecting to like very much at all. I was involved in a studio recording with one of these snares, and I first tried to not use it. I have been let down by Mapex before, but in 2010 I helped my nephew setup a Mapex set and liked the stock snare. I figured it was a one-off, because back in 2005 I played a Mapex set with a wooden snare that I hated. This snare comes in various sizes, and if i recall the studio had a 5x 13 snare version. I was going to settle for a piccolo snare thin body just because I didn't want a brass snare sound, but the recording engineer recommended otherwise. I could not argue, it was his call and I conformed. This snare had a crack and a snap to it that required very little power or force. I was pleasantly surprised by this. I expected after a few hours playing on it it would die down but it didn’t. The more I played this snare the more impressed I was with the sounds I was getting. Sure the hardware itself, the snare fastner felt like garbage aluminum bent into shape, but the thing functioned fine. I was completely impressed, as I am a drummer and musician who cherishes in good purchases for little money as possible, and this snare certainly delivers. The only thing I didn't really like was lifting the snare up, it was very heavy. This is definitely a good thing for a professional recording atmosphere where the set stays in one location at all times, but if you are a traveling drummer out on the road a lot or just like to transport your set around a bunch, you might not want this snare. I would say this snare is not for the beginner, but for the experienced drummer who is looking for a big band drum sound. The brass brings this snare into the classic marching drum realm of sound, while it is heavy and solid and has the crack and snap of that of any American band like Bruce Springsteen’s Max Weinberg “big room snare” or other artists of that era and genre.
Did you find this review helpful?yesno
»

Mapex Brass Master Snare
5
The Mapex Brass Master Snare Drum is one that comes in a variety of different sizes and isn't part of any larger drum kit that I'm aware of. I've used this snare drum in the studio where I was the engineer and not the player, as a session drummer brought the drum in with a few others to record with. He had some good drums in there but this is the one we went with for the song we were recording. It was a pop/country kind of song and this snare just seemed to work best for the tune. The snare has a great crack to it that cut through extremely well. The full kit was one from Slingerland and it blended in nicely. The Brass Masters snares do come in a variety of different sizes, although I'm not sure what the range is. The one that I've worked with was a 13" x 5.5" and I've seen other smaller sized ones, some as small as 3" deep. The one I used had a great sound with a lot of crack to it, and I can imagine that the smaller the depth, the tighter the sound. I think I even saw a piccolo version of this snare. I don't know all the materials at play are here but of course it's a brass snare and is quite heavy. The price is reasonable for a snare of this caliber, and I'm not sure if this changes for different sizes of the drum. It's definitely a professional's snare that isn't cheap or for those just starting out - if you're looking for something to swap out with your kit's snare drum for a different sound, this can definitely compliment your kit and add to your overall sound palette. The Mapex Brass Master Snare is worth checking out in any size if you're after a great snare drum to add to your collection.