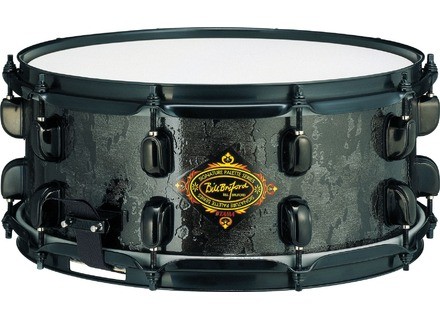 Tama BB146 Bill Bruford Signature Snare Drum
5
Well I was not informed of this drummer when I first saw this snare drum so I had to do some researching. Bill was one of the earl guys in the band Yes. Yes was a British band from the 60's and 70's that wrote hits like Roundabout and Owner of a Lonely Heart. They are still today and very popular band among jazz players and progressive jazz musicians. The band had a cool sound that found its way changing tempos and stop of the a dime dynamics. So it is easy to see why now knowing what band he was from why Tama decided to give him his own signature snare drum.

This snare drum is not only beautiful to gaze at but a thrill to play. This snare is one that feel as good as it looks. Tama's BB146 Bill Bruford Signature Snare is based on Bill's main snare with his band Earthworks. Much of the drum's inherent liveliness comes from Bill's affection for flanged hoops on his snares. Plus the addition to the maple and birch wood combination make this a very tight and snappy feeling snare drum. This would have been the snare drum that Bill used during his Earthworks career. You'll have to go back and listen closely to the sound and attack of that snare to here the tonal complexities.

You can definitely hear the tonal complexities in this drum when you hear Bill's playing. It can easily be described and tight and focused. A quality focused snare drum is critical to having the rest of the rhythm section and the band to following along.

At new these drum snares come in at around $670, which is a bit high for a drum snare. Most people would find this expensive for one single drum. You are going to pay this price to have this distinct tone.

I would recommend playing this drum before purchasing to understand the tone and feel of it. It would be better if you got the chance to use in a band setting but that isn't always the it happens. So try before you buy!!