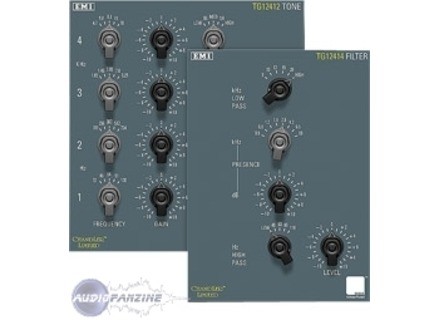 Abbey Road Plug-ins TG Mastering Pack
3
This is probably one of the smallest and easy to install plugins I've ever used. Not much to it really. I don't know if it comes with a manual because I didn't bother looking. The first thing I noticed when I booted this up was no presets. Well that's fine, because upon further inspection I realized all I was looking at was a semi-parametric EQ with some filters. Okay...

I will say that working with it in Cubase it gives me zero issues. Very stable plugin and it doesn't tax my CPU at all. Then again as far as I can tell there's no complex processing going on here so why should it use many resources at all?

When I first started using it I was expecting some kind of secret sauce to be involved. Why else would they charge this kind of change for a simple semi-parametic eq filtering master? To my ears that's exactly what it was though. Now I'm not trying to be rude about things, but I can get one of those for free almost anywhere. I pay for one of these because I want it to sound warmer and more pleasant than a cheapo mastering plugin. But the TG honestly doesn't sound any different than the bundle of free master eq plugs I have sitting around.

I went online and started asking around. It seems this plugin is very popular with engineers who used to use the real thing and miss the feel of it in a DAW. Now I can understand that. If you get used to a certain piece of hardware, not other soft based equivalent will feel the same. Makes perfect sense. However, for someone like me who has never seen or used a 12410 I had to stop and wonder why I even needed this. Perhaps I'm expecting too much. I have tried some of the other Abbey Road plugs with mixed results so I'll probably do some reviews on them, but I just didn't hear anything special about this one. From what I hear it is a good emulation though, so maybe its the hardware itself that I don't like.
Did you find this review helpful?yesno
»

Even when I have used these plug-ins in the Abbey Road Plug-ins TG Mastering Pack for things other than mastering, they have run very smoothly and without issues.  While I do usually use them for mastering, I find that they occasionally work great for mixing and I will throw a few of them up at once, which usually isn't a problem depending on what I am already running.  I have these plug-ins running on a Mac Book Pro that has a 2.2 Ghz Intel Core 2 Duo processor and 4 GB of RAM and I've never really had a problem with these plug-ins no this system.  Since they are made for mastering though, I wouldn't recommend using too many of them at one because they simply aren't suited for this type of use.

After using the Abbey Road Plug-ins TG Mastering Pack for about a year, I've been very pleased with the clean sound quality that this set of EQs provides me with, both for mastering and for mixing.  However, unless you are going to use these primarily for mastering I wouldn't recommend picking them up because this is really what they are best at and using them for mixing on occasion is a bonus and the price isn't cheap enough that you could use them as a luxury.  If you are a mastering engineer looking for a great set of EQs, the Abbey Road Plug-ins TG Mastering Pack definitely provides that.

Published on 09/30/08
Abbey Road Plugins has announced that the AU and VST versions of the TG Mastering Pack are now available.