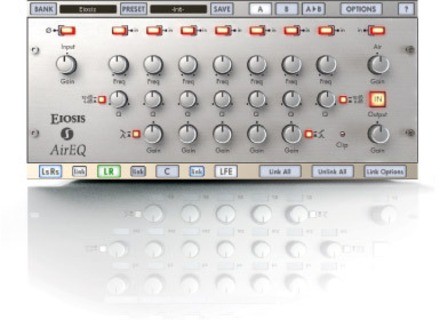 Eiosis AirEQ
5
I didn't have a single problem installing Eiosis AirEQ as I didn't have any compatibility issues or other problems.  Within a few minutes I was able to use the plug-in within my configuration and was able to figure out the interface rather quickly as well.  The plug-in is a parametric EQ and has seven bands of EQ, the middle five of which have parameters for all of frequency, gain, and Q, while the outside two only have frequency and gain as they are really low and high pass filters. In addition to these parameters, Eiosis AirEQ has some buttons for pads and to choose the type of filtering as well as a knob for output gain and air gain.  If you have experience with EQs you won't need a manual for this plug-in.

Thus far I haven't had any problems at all running the Eiosis AirEQ plug-in.  I am running the plug on a Mac Book Pro that has a 2.2 Ghz Intel Core 2 Duo processor and 4 GB of RAM.  I run the plug-in in Pro Tools LE 7.4 that runs with either a Digi 002R audio interface or a Digidesign Micro Box depending on what I am using.  This plug-in has run pretty flawlessly within this configuration as I am able to run as many of them at a time as I'd like, although I tend not to go to crazy with it and use it only on things that I really need it on and use other EQs for other things.  As long as you have an adequate system that can run your sequencer with plug-ins well, you won't have any problems running this plug-in.

I've had the Eiosis AirEQ plug-in for about six or eight months and I really like just about everything about it.  It has a very user friendly interface that is to the point and without any clutter at all.  It provides more than enough control over your tone and everything sounds quite clean when run through this EQ.  It is a powerful piece of software that would definitely recommend to anyone looking for a software EQ that is a little more in depth than the standard ones that come with Pro Tools and other sequencers.  The price isn't the best, but definitely isn't overpriced; it just isn't a bargain.  Overall, this is a very nice plug-in from the a company that I didn't know too much about until getting this plug-in.

lorand's review (This content has been automatically translated from French)

no crash with the plugin I can even do direct monitoring

I used the last three months nothing to say
j I sold my UAD-1 cards
and I was looking for a good eq very close to analog.
I think the waves are too expensive day I tried a lot of other plug
but personally aireq none such.
+ + + Sound
+ + Button air
+ Low power consumption cpu

Eiosis AirEQ
3
This is the Demo version
Installation is no problem.

Core2Duo E4600
the plug is not resource hungry.

I tested the demo out of curiosity, and despite a good sound, its real value compared to other plugs resides only in the button "air", which does not justify its € 180.