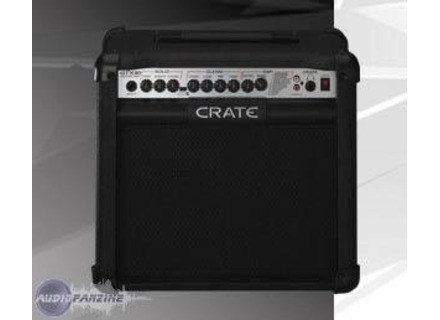 
2 user reviews
Find it in the classifieds starting at $75 Avg used price: $75

All user reviews for the Crate GTX30

Crate GTX30
3
Crate has been known for their very inexpensive and extremely cheap instruments and amplifiers. This is a very cheap amplifier I has a load of the effects and modeling amplifiers built into it. This is basically the same thing is any other line 6 amplifier that has modeling technology and a solid-state amplifier. You get 30 W of power and a 10 inch speaker. It gets pretty loud for a 30 watt amp but the tone of it if you can even call it that is not worth the time. If you are just learning then it will do but if you start getting better and want to jump into a band this isn't going to get you there.

The tone of this amplifiers and basically exactly what you expect.... not that great. It doesn't have a full rich tone but it's really just a beginners amplifier in general. This is not to be an amp at a professional or anyone he spent any time with a tube amplifier is going to pick up. It's a simple amp for someone just learning how to play and wants an all-in-one with the facts and everything built into the amp. The tone isn't anything special at all but it will get you a good enough sound to practice with if you are just learning.

These amplifiers have been discontinued for little while now so you would have to look on the used section of classifieds to find this amplifier. They're pretty cheap out imagine you can find them for under $100 somewhere. However if you have spent $100 and I suggest picking up one of the Peavey modeling amplifiers that has much more rich tone and usability.
Did you find this review helpful?yesno

sepultfan's review (This content has been automatically translated from French)

Crate GTX30
5
Any transistor amp 30w, having two channels, clean and solo. we also find a section of 16 DSP effects. You can assign an effective channel to be automatically saved.
The amplifier circuit is the circuit FlexWave found also in the series glx.
It has a headphone input, two RCA jacks (for connecting a CD player to the amp)
footswich of taking, and an exit to go to a cabinet, a strength of at least 4 ohms and a headphone jack.
It is fairly well equipped level connectivity, but is not present, so I do not note the maximum

Bon ba first I want to say one thing that surprised me with this amp at first sight. It gives us an impression of the quality gear solid hands. True, the Tolex is nice to see, the main gate of the enclosure as well, and button provide a little resistance when they are running. It was not like they will block a time to another. Otherwise, the setup is super simple there is not much to understand about this amp, and the sound is relatively easy although some adjustments are not progressive enough for my taste (I think the setting notement shape of the channel solo) . A by I bought this amp gross I do not know if it comes with a manual, but good for an amp as I am frankly doubt that useful (unless you do not know connect a guitar in an amp but I can not do much for you). And one last detail, this amp is guaranteed for two years and the guarantee is transmitted to the owner that you resell the amp during the warranty period (that&#39;s nice). So here, I put that to 10 because the amp can not find my sound to me (bah what?

Okay so attaquont by the channel clear: the shock, and bin it sounds ... Is a huge dynamic sound rings clear until the first half of the pot level, as on my Marchall but really better. And it is a clear slam that finally twangue all you want but it&#39;s enjoyable. From the second half of the potentiometer, the amplifier generates a small crunch nice enough, but when a problem is used: there is no master volume on this amp (it should look more powerful in the range for this) so that if you want that crunch you have to push the amp a background which is annoying for an amp of work (the goal is to not piss off the neighbors though) So here&#39;s a shame. Finally, the equalization of this channel (which must be common to both) is quite effective, but be honest, I did see more on this point.

second channel: Hello metalheads friends ... So the first thing that channel has a lot of gain (more than my marshall 100hdfx). In addition the grain fat enough of this amp is that this channel is very suitable for metal, extreme metal and even, finally it&#39;s true that this is the big sound that made the reputation of Socrates ... So to get a nice little overdrive it&#39;s not impossible, but it should get him ... It will let us be frank amp is not for ca even if the limit it can help: friends blueseux then buy a pedal or visit allieur. So it is said. Personally, I find that the distortion goes well with the EMG 81 in my guitar. This gives her a rather fat (amp), but not too much, and it remains clear and audible ...
Okay so I take off half a point for the overdrive that could have been a little better on the solo channel (when the gain on zieuter 3-4). That a half I removed because the clear sound and distortion can really deliver.

Finally, to the effect, I do not have much to say except they are pretty, but they make it better if you plug the amp in a 4x12 (I think notement has Octaver). They are not gadget, and the ability to assign one to each channel (in fact it is automatic) is handy if you want to use them.

I bought this amp yesterday. I have not played badly in the store and home, of course.
I like the sound of this amp on both channels. I tried the vox, the valbee ibanez, marshall mg (of course I have) and valestate, randall rh100g3 (something like that), and Peavey ValveKing Transtube, fender and others I forgot ( or which did not score) and I can honestly say that in all this amp transistor that defends very well, and the sound and there. After the distortion may be a little guy, but if you make the metal, you&#39;ll get your dough, I managed my personal chop for 160 euros in a shop near my house and I had to mez gold coins, I do not regret that choice and I do it again, even compared to a Vox Valvetronix (which forces me to endure at least one hour per week), an ibanez valbee that sounds good, but with an I do not know what annoys me ... Here I hope you have finally convinced, it remains for you to try and make your own opinion ...

edit: here I would like to add some details about this amp. It tends to be less accurate gain a background (unless like me you have a scratch emg equipped ... and as there is gain, there is feedback. That&#39;s it ...
Did you find this review helpful?yesno
Cookies help us improve performance, enhance user experience and deliver our services. By using our services, you agree to our use of cookies. Find out more.