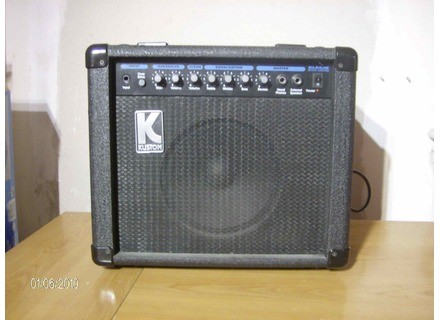 Kustom KLA20R
4
i bought this amp from my friend when i started playing guitar/bass. i payed $30 for the amp and $100 for a bass. they were both quite used. i didnt know anything about guitars or amps.

wow, this unit has been very useful for me. when i first got it, i ran a bass guitar through it absolutely CRANKED and there it didnt blow out, nor was it unable to keep up with a friend's fender 25 watt guitar amp. it has 3 band EQ for decent tone shaping, reverb, and overdrive, and i like them all. but what prompted me to write this review was when we were playing a gig last friday, about a year after i bought this amp, we were able to run vocals through this amp! I had brought this amp along for a warmup amp. My guitarist's Crate 65 watt MX-65R was not working; for some reason, it wasnt getting power. so we took the 120 watt amp we were planning to run the vocals through and put the guitar into that and ran the vocals through my Kustom KLA20R. Unbelievably, the vocals could be clearly heard through the tiny amp, even with a 120 watt Crate guitar amp, an Ibanez 65 watt bass amp, and a Yamaha acoustic drum set! The volume was not even all the way up on the clear channel. I cant believe the versatility and the durability of this amp.

The amp is kind of heavy for such a small amp, but that's not such a bad thing. the speaker is not very good quality either--run something like a CD through it and you can it's very grainy (this is not the case with other amps-some amps cds sound crystal clear) also, with a guitar the clear channel is not very loud. On overdrive it makes a fine practice amp.

i believe i addressed that above, but overall the amp seems to be built like a rock. i wouldnt drop it out a five story window or chuck it out of a car on the freeway, but it is built fairly strong. Also, it is built of material that does not scratch easily. i like that alot.

Fine amp for a cheap practice amp or if you are just starting out. Very versatile as well. It is far from the best out there, but for the price, it may be the best deal for the money. 3.5 stars, not quite 4 stars.