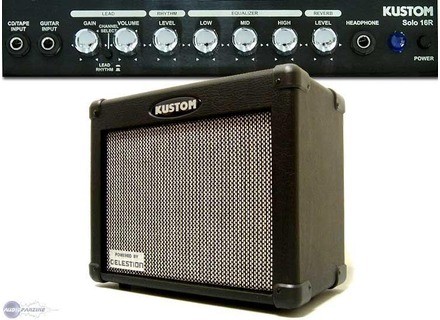 Kustom Solo 16R
5
I bought the Kustom Solo 16R from Earcraft Music in Dover, New Hampshire, for $80. I wanted a cheap basic amp for practicing and I knew the Kustom Rehearsal series was the best for this.

First of all I love the simplicity of the amp. It's got two channels, lead (distortion), and rythm (clean), both of which can get very loud. The analog reverb is a nice tough too. Along with the 3-band EQ you can create a wide variety of sounds. There are countless possibilities, and this makes for a versatile practicing tool.

The Solo 16R is also very small, and weighs about 16 pounds. You can put it just about anywhere and it'll stay there (plus it looks nice).

Finally the instructions that came with it are simple, but more importantly they come with four suggested settings to get the tone you want: clean rythm/country, blues lead/mellow crunch, alternative/hard rock, and heavy metal/maximum crunch. VERY helpful for the player who doesn't understand or doesn't want to learn too much about the EQ and reverb settings.

There are two big flaws with this amp. One is that it doesn't handle highs too well. Turning up the Treble all the way up produces a lot of static on both channels. Even turning it up to about 80% produces a good deal of static. Same thing goes with the volume (again, on both channels). You'll rarely ever want to have your volume turned all the way up, but if you're a tone nazi like me and want to get that specific sound you've always wanted, the treble EQ will give you problems with the static it produces.

Second, this thing gets a lot of feedback (along with static) from the lead channel. Worst thing is, most of the time it gets so loud it sounds as if you're running your guitar through a 100 watt amp at maximum volume. The feedback only occurs if you turn your gain up more than 50% and if you leave your guitar alone (although the static is always there unless your gain is at zero). I've found that you can get a nice crunch by turning your gain at 40% or so and this setting won't cause you trouble. But if you want a really heavy sound for metal and even for hard rock, you better keep playing or else you'll get feedback within 10 seconds after you stop (or you could just turn your volume all the way down).

Built like a rock. [/chevy] As with most amps, it's very durable and won't break easily. The knobs are tight and CD/Tape Input, headphone and guitar jacks are solid too.

The only techincal difficulties I had was with the power. Sometimes (and this didn't happen often), the amp wouldn't turn on. The power button would go down but not stay down, or it simply wouldn't go down at all. This happened to me three times in the month that I've had this amp, and talking to other people, they've rarely if ever had this problem, so I wouldn't worry about it.

This is by far the best low-end practice amp I've ever played or tried. It's solid, simple, and has few problems.

Keep in mind this IS a practice amp and just that. Don't expect the sound of an 80W Marshall.

benj63's review (This content has been automatically translated from French)

Amp power good low budget but cool to repeat.
reverb ok but better not dream too much.