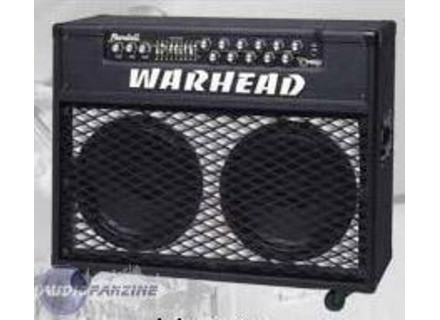 Randall Warhead Combo
5
Purchased this last week from Music 123 out of New Jersey. Great service and the amp was delivered shipping cost free to my door with no sales tax. This was labeled "B" Stock, so I got it for a killer price of $730.00 I can't tell why it was a "B Stock, but the guy at Music 123 stated that it was most likely a demo at a show, then repackaged as new. Comes with a 5 year warranty, parts and labor. I decided on this amp because I love distortion. I tried out several Marshalls at the local Guitar Center, but they just didn't feel like what I was looking for. This amp is what I was looking for, but it is such a fairly new model, not much was known about them.

I have read all the reviews on this amp at various places on the web, and I didn't know what to think. One guy loved it, the other guy hated it. I'm going to give you the goods on this once and for all. I don't care what anyone says, this is by far the best amp for heavy metal on the market at this time. With the master level on only 2 to 3, with the EQ bass up high, mids and treble fairly low, this amp will shake the home off the foundation. Some idiots reviewing say they can't get it loud enough. What at they talking about? Did they really have one to play? This amp has 16 various effects that are all heavy. If you like it heavy, this is the way to go. I haven't down-tuned and tried it out, but it should be nothing short of amazing. This also has a clean channel, so it isn't a one-trick pony. I have a POD, so the clean channel will be for that, and the distortion channel will on most of the time when the POD isn't pulled out from the closet.

I like everything about it so far. It is so heavy, but it feels solid. I wish I could tell you something bad about it, but I can't.

Heavy duty rock n' roll. Excellent quality. I think you could run over the unit with a truck and it would still work. Has the look and feel of an amp worthy of standing up to the abuse of Scott Ian's roadies.

I estimate that this will be the last amp I buy for the next 20 to 25 years years. I bought my last amp in 1985, thus for me to wait 17 years and get a new one, it better be exactly what I wanted. This product far exceeded my expectations, but I wanted an amp mostly for my own enjoyment, and playing the heavy stuff is what I enjoy. I hope that anyone interested in playing heavy metal goes to a music store and tries it out. I believe that once you hear it and feel it, you will decide, like I did, you just have to have it. I have a 1999 BC Rich Warlock, 1976 Gibson ES335, and a 2001 Gibson Translucent Purple 98 Flying V, and it makes them all sound hard and heavy. It feels so good to have an amp that truely compliments my guitars and playing style. Dimebag, your name is on this and it really is a great piece of gear. Good job Randall!