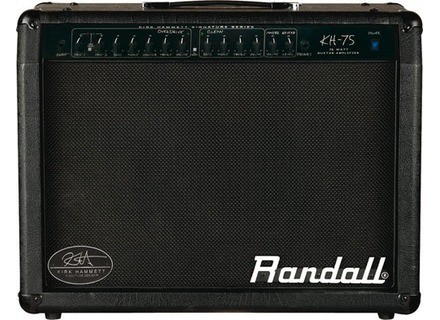 chouli's review (This content has been automatically translated from French)

The configuration of the amplifier, if one seeks the true sound of Metallica, can be daunting at first. Indeed, we must know that the knobs are not there to make nice. If only that of "contour" the move an iota not hurt to change the tone of the amp. In fact, you can have the sound you want (relatively speaking with racing animals worth five times its taken, of course ...). It is not Plug and Play what ...!!! But I find the amp much more
The Celestion Seventy 80 is well made and has no background noise even at high volume.
on the other hand, manual side is the red card for RANDALL, there is not much apart from a pattern of connections of the amp.

I play mostly metal but I like good clean sound for small quiet riffs too.
Both types of saturation (rhythm and lead) are found and sound good, you can adjust the gain of these channels differently and that's fun.
For the clean sound, adjusting reverb can give more body to the sound but do not abuse it too much pain to believe in a cathedral!
RANDALL brand is a brand that has proven itself and for good reason, in the clean sound is really good and playing with the EQ you crunch you need
Note that I played with a rise in CORT Z6 EMG 81-60 and the sound is metal, this is not too shovel made for the blues or jazz ...

I must admit that this is a good surprise, firstly, in view of the price (290 € uros FDI in certain creamery) nothing can blame him.
In saturation, the metal god watch over us and he has in his belly this amp. In addition to the footswich included looks good beefy
Conclusion, very good amp and without fuss (I mean, without artificial and unnecessary effects as is the fashion for many transistor amps) and a good investment.
Today I would do without hesitation that choice!

enliin's review (This content has been automatically translated from French)

The setting is not easy at first, the knobs are sensitive and very effective, but even a little groping quickly found the sound that is sought.
Despite this use is very simple, it still sounds just as much to clean in OD, then it is a matter of taste and song.

One thing merdouille a little: the footswitch. As you just be read in forums of this site, it is poorly designed. I explain: the ass of the beast There are 2 jacks: one "channel reverb" and other "OD1/OD2. The problem is that you can not connect the two. So by plugging in the footswitch on the "channel reverb controls the reverb is on / off and change channel Clean / OD. And by plugging into the jack OD1/OD2 ", it only controls the mode change (gain 1/Gain 2) Overdrive channel.
Randall has a bit screwed up on this one, then it depends on what you play. As my colleague

previous comment, I play mostly metal, with occasional riffs calmer, with two clean "you could turn down the sound please": D so this amp suits me perfectly.

Being an "old beginner, before I played on a Vox AD15VT Ibanez and Valbee with a Digitech RP255 multi-effects for distortion. Both say that spending on the Randall was a shock lol.
The Clean, although it is a clean transo is nice, especially with the EQ very malleable, and the distortion is ... hell: D There are not many "power" in the disto is not a Mesa, but I love the grain of this very special amp. It spits it oats, it rocks, in short, to my ears it's the foot (yes I am very flexible ^ ^).
After that it depends on the tastes ^ ^

I play on a LTD F-50, which I changed the pickups to switch to EMG 60/81, and I kept the Digitech RP255 multi-effects, that I put in the effects loop, but only using compression and noise gate.
Even with this rather low-end guitar, I can find sounds very nice, approaching Metallica of course, but also In Flames, Megadeth, etc.

As mentioned earlier, I played on before Vox AD15VT Ibanez and Valbee, and multi-effect gave me the disto.
With Randall I finally a real distortion, which even if it's not light, is far better than modeling. I finally have a grain Vrain.

You like Metallica style? Their sound? You have a budget too small to pay you a Randall or a Mesa Tube? So go for it on this amp, or its equivalent head KH 120 (having the same channels).