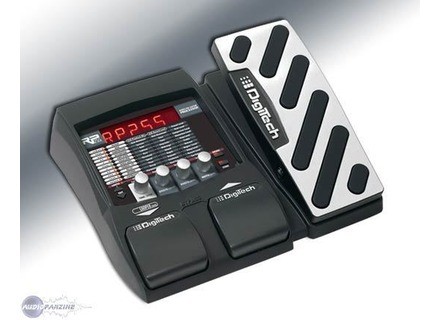 RP255, Multi-Effects for Electric Guitar from DigiTech in the RP series.

ElZikos's review (This content has been automatically translated from French)

The general configuration, editing effects is ULTRA-SIMPLE with X-Edit2 software was downloaded from the website of the manufacturer, because not provided with the beast.
I have not even tried to solve the patches directly on the RP255 is so easy and obvious for my PC. That's why I chose this multi effects, tired of fiddling with the buttons of my ex-Zoom and Korg.
I'm currently not even open the manual (supplied on paper yet and French) is so extremely simple.
Some patches are cool on the forums of publisher's website for those who would be bothered to do themselves

The effects are endless, and above all respect the sound of my guitar and my amp (Laney and strat LC15R lamps) I let down the input factory settings, as always very exaggerated on such material, or may be effective with a guitar and an amp low end. But if you want a sound so natural with the good stuff, make your own patches, it's too easy to deny it ...
A small downside to the looper, which allows only 20 seconds of recording, not even the 12 measures of a blues a bit slow. So I keep my boss was quoted loop station.
Although the box has seen its 60 preset rhythms and different, it's simple and effective, at home or rehearsal without a drummer, nickel!
To conclude, this is the kind of multi-effect that is not restricted to Hardos metalheads and all bristles (who will find their happiness when) but easily usable by someone like me who is looking for blues rock sounds pretty hot natural, even to the limt of Jazz.

I have used it for two months, working at home and in rehearsal, nothing to report. I had several other multi effects, zoom (old low end which I do not know the model) and Korg AX5G, the verdict is clear and definitive: there's no picture. I did not like the sounds of Zoom, Korg those were better but I find it super hard to resolve, whereas here everything is very easy.
What I like best: The infinite adjustments, very fine, especially since the PC interface, and the tuner very fine and visible under all circumstances.
What I like mins: The Looper with only 20 seconds