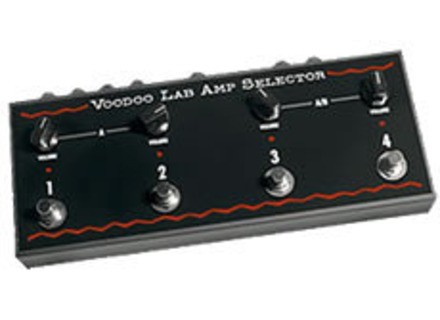 Voodoo Lab Amp Selector
5
The Voodoo Lab Amp Selector is a simple device that can bring you a long way if you have a few different amplifiers and want to use them either simultaneously or switch between them. This is better than most A/B selectors out there because you can use up to four amps at once! Each of the four channels has it's own independent volume control and a foot switch for each to go along with it. It has a variety of connections to work with, and also allows for the separate output of a tuner or effects. It's really a simple pedal controller but it can do a lot for guitarists who are playing a lot of shows in larger venues and might have a few amplifiers to work with. It can serve as your ultimate one stop shop for controlling your amps. The Voodoo Lab Amp Selector definitely isn't for everyone as not too many guitarists will have four amps at once happening. Most will have two at most, and a much simpler A/B box will do the job just fine for that as it will save you money and make your rig less convoluted. If you think you might expand, this will probably be a good idea to pick up at some point or another. It's not going to be totally necessary anywhere outside playing live shows as that's really where it's best suited. The price isn't as cheap as I thought it would be, but for a professional it's still not too costly considering there aren't too many pedals of it's kind out there. It's very well built and should last a lifetime as long as it's treated properly, so if you need a four way amp selector, the Voodoo Lab Amp Selector is going to be the go to pedal.

equivalent to the palmer

still too expensive but the only one doing this job, so impeccable