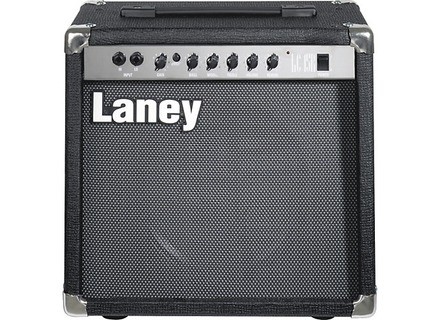 Laney LC15R
4
I have played since I was 12 or 13 and I am 42 now in march 2007. I like classic rock music likes of neil young, love, the who, new wave late 70's early 80's the likes of television the teardrop explodes echo and the bunnymen and everything between john martyn, nick drake, the doors, nirvana you get the picture. I also like the old school hip hop like bambata and the old tommyboy stuff, and house music, and modern stuff white stripes, blur, killers, arcade fire, tapes'n'tapes, artic monkeys, oasis, ETc, ETC, ETC.

I bought the amp from ebay for £135, the amp was £199 @ the time, these amp do keep their price. I bought it because I wanted a small valve amp with reverb. I have had the amp for approx 2 years.

The LC15R is pretty well equiped for the price @ the time there wasn't many valve amps around in the cheaper bracket, there seems to be more and more cheaper small amps around now like the ones from ibanez and epiphone. The amp has 2 inputs one brighter than the other, it has bass, treble, middle, gain, volume, and reverb. It also has an effects loop, direct out, ext speaker, and a reverb on/off footswitch, which work with any latching switch. It has quite a lot of gain so you can get the full range of sound and volumes from it. The amp is pretty well featured and the tone is pretty good for an amp of the price.

What I have noticed about these and other equpment reviews is that people arn't too objective about their equipment, I mean whos gonna say well I went and bought a piece of crap, or perhaps people just wouldn't go and be bothered writing about something the don't like. But anyway this amp comes with a crap speaker ( I believe that it now comes with a celestion tube 10). I replcaed the original one with a nice webber signature 10, I also junked the sovtek valves and put in a set of JJ's, the amp really sound nice with these alterations. I also rigged the speaker up so it plugged into the ext socket because when you plug into the ext in the original config it didn't short out the internal speaker so I wasn't too sure about the ipedence. The other thing with the amp is that the pots are really small with tiny chicked heads and some are getting a bit scratchy but it is a cheap amp.

The build quality is a bit harder to say the cab looks like it's made from MDF, the finish is a bit rough around the back but hey. The tolex looks perfect so far and the amp is made in the UK, which I am not sure about the newer ones, I noticed in a review of one of the larger Laney amps that it was made in the far east. More and more British amp companies seem to be doing this IE Vox, Celestion, Marshall (their cheaper amps anyhoo), Orange, and Laney. To me this seems wrong especially for the like of Vox and Celestion, people pay for a product that is associated with Britain and they are made in China vox and celestion arn't cheap either, if Marsahll can manage to make all their more upper class stuff in the UK I don't see why they can't. The other nice feature about this and all of Laney's stuff is the chrome front panel very classy.

The bottom line is that this amp is a good buy @ the price, when you compare it to say the fender blues junior @£325, with no reverb, the laney @ about £200 or less, and with reverb is a good deal, and with the non reverb version @ about £160 they are well priced. Check it out yourself try ebay or as I said they are pretty cheap new and if you don't like it you will get rid of it on ebay and you won't loose much.

Laney LC15R
5
I got the amp used for £150, which might seem alot but it had only been used twice and never gigged . It also had new valves put on it.

What is there to not like about this practise amp? It is amazing, it has a sweet tone , looks good and it is VERY loud. Probably loud enough for gigging but I haven't tried it yet. The sounds that you get are warm sweet and of a quality that makes you look twice at the price tag. I use it with a Zoom 505 multi-effects unit and some of the sounds I get are absolutely amazing. I have already mentioned that the looks are very tasteful and I would say it is one of the best looking budget valve amps available. Excellent!!!!

I can't really answer this one! There isn't anything I don't like about this amp. Except the fact that being used to a solid state amp it takes a while to get used to having to let it warm up.

I haven't had that long but from what i can see it is of very good quality. The knobs feel sturdy and have a smooth action but I am constantly worrying that I am going to break one of the valves because there is nothing to stop them being hit . So as far as I can see it is of a very high standard of buil quality.

What can I say? It is absolutely brilliant. I used to get bored playing my guitar through my old amp but now once i start I can't stop until I fall asleep. It has renewed my interest in guitars all over again!!! Buy one now!!!!!!!!

Its valve, 15 watts and sounds absolutely amazing value for money. It covers clean and dirt sounds nicely and it is very loud (I have gigged this amp and it will quite happily break through the noise of the bass and drums. It responds really well to the volume of the guitar. (It has to, it is a single channel amp) Put your strat on 6-7 on the vol and the unit remains clean, up above 7 and then you get crunch, dirt then rock/solo. Excellent!

The Invader speaker in it isn't much cop - stick a Jenson in and you will improve the amp further. Similarly, stick some decent valves in it (it comes with mediocre Chinese valves in it). Ok, this adds more to the price of the amp and makes it non original but you will still do better buying this than trying to buy an off the shelf package for the same price. The valves sit directly on the pcb -this may not be a problem but the heating effects may cause some problems down the line...?

Good solid unit. It survived falling down a flight of stairs (thanks to my flatmate) and still works perfectly. (Amazingly there was no cosmetic damage either!) I think that speaks for itself. The valves seem a little exposed - be careful not to knock them or anything! At the end of the day, it is built fairly well bearing in mind it is a budget amp! You can't expect the earth...

A excellent practice amp that is rugged enough to gig at small venues. Its tone is very British and superb at that. Stick a mic in front of it and you got a very useable amp for any venue.

Laney LC15R
4
The Laney LC-15R is one of the smallest variants of the LC series line, which is noted for its more vintage styling and tone. This particular model is a single channel amplifier, putting out 15 watts of power that is run on EL84 tubes. It has a single 10" speaker for great portability. The single channel has a gain control, a bright switch (acts sort of like a brightness control on a Fender, or a Top Boost channel on a VOX) and the typical EQ stack of bass, middle, treble. There's also the standard volume control, and a nice spring reverb as well. The back houses the speaker jacks as well as an effects loop, great and useful features.

Getting a good tone out of this amplifier is pretty easy. There's not a lot of controls to get your head around and the layout is pretty typical. Its closest competitor is the Fender Blues Junior for features and general layout. The amp is single channel so my best approach to setting it up was to either set the amp up with a more mid gain sound and use a boost pedal like a Super Overdrive to kick it into high gear or setting it up for its highest gain tone (think early Van Halen sounding) and then use my guitar volume to clean it up. The EQ reacts pretty typically for an amp of this type, though understandably there isn't a ton of low end considering it only has the one 10" in it.

This amp, despite its simplicity, actually sounds pretty fantastic for the price and features. It's got to be set up for each, but you CAN get a great clean and some rippin' drive out of this amp as well. The clean tones are jangly and clear, with a teasing hint of Fender-y sparkle and chime, perfect for single coil players or perhaps P90s/lower output humbuckers. Easing up the gain brings the amp into great bluesy tones that work very well for gritty blues and early rock n' roll styles. Switching into the highest gain setting gives it a certain British fire that's reminiscent of that great tone used by many rock gods of the '70s and '80s. Sure it may not have the POWER of your vintage Marshall JMP put on 10, but it's got that sort of tone if you want it.

All in all I think the Laney LC-15R is a great little tube amp for the player who wants a classic look, easy to use layout, simple yet useful features and a great variety of tones in a single channel design. It sounds particularly cool and it definitely is a way to get that British tone in a cheaper and portable box. At about $500 new these amps were fairly priced when new and you can find them for $300 or so if you look now. Definitely a great little gem in this world of amps. Go check one out!
Did you find this review helpful?yesno
»
Read the 15 user reviews on the Laney LC15R »