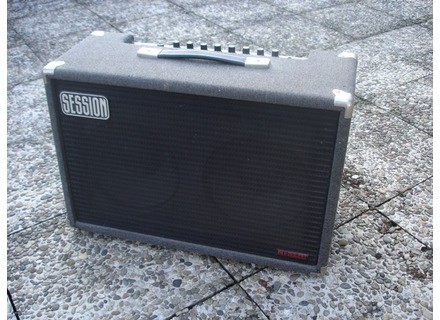 lse's review (This content has been automatically translated from French)" Amazing that a transistor can be good!"

Session Sessionnette 75
4
75W transistors was made in England.
My model is a SG75 1987 (info from manufacturer that 25 years later, still responds to emails within the hour ...)
Full connectivity, effects loop, line out with level control, headphone output, two foot switchable channels (I do not have the footswitch), HP external output
3-band EQ, the overdrive channel has a "filter" that plays a little role of a tone
There is no master volume each channel has its own volume (called gain, which is a little confusing at first), there is no big difference in sound between the two channels.
Reverb Acutronics
1 HP 12 "FANE" Made in England "for mine, Sessionnette was built 81 to 88, the first models were equipped with Celestion, so mine who is 87 has a FANE.

The manual can be downloaded online:
https://www.award-session.com/pdfs/SG75_Schematic_Instructions.pdf

The designer of this amp, Stewart Ward is still in business and still retains Sessionnetes (he was also a mod Retro Tone, meant further improve rendering)

The manipulation requires a little practice, but once considered getting a good sound is the basic position, it's a bad sound that is difficult to obtain.

I use an Epiphone ES335 1980 and a Godin 5th Avenue Kingpin
In both cases it is very good, especially in the clear.
A volume of apartment n it has no difference with a vintage tube (I had a Laney CUB10 and I have a Bugera V5)
The sound is fat, organic, frankly we do not know if this is a transistor amp it's really hard to guess.
The overdrive channel is nice but not at the light which is amazing.
Used sparingly reverb is beautiful

I paid a pittance on Ebay and this is THE great surprise.
I originally bought it to turn it into cab 12 "(I paid 15 euros) and there frankly I'm on my ass ..

I care!
It has the sound of a lamp and the ease of a transistor ... great
Added to this a quality production that are found today, this amp is 25 years old and is in impeccable condition, we see that he lived but because of the way it was built he does not fear much (In return, it is rather small it weighs a dead donkey).

sonicmath's review (This content has been automatically translated from French)

Session Sessionnette 75
4
Brittanie 75W amp transistors. amp fairly comprehensive, it has two channels, a three band qualisation, a saturated gain channel volume per channel, a channel filter for a saturated switch for legalization. Note that the switch like the old wall switches that can be shuffled and channels clear and saturated.

derrire found, an effects loop, a line output and a headphone output.

and the rglage between faade but not in the rear up like a VOX, which can take up less space and it's pretty nice. Moreover, this amp is simple Aesthetics. mine is black, tweed coated with aluminum logo on the protection of HP. In any case I like.

it's good when even a little cheap.

line output is more like a grsillement than anything else ...

Ben is an amp then use it when you know there's no problem.

The amp suits me in the sense that it is anything but metal. saturated gain of the channel - which is a kind of distortion plutt included in the amp - not pushed trs. even when we get a big sound in zapping the eq. The distortion is fat and quite roots, not bad brittish. clean sounds? better to put the distortion to a minimum ...

sounds are worthy of a proper amp no more - what it is. the reverb is beateau but effective, and it should not be too pushed.

me to bluff a bit of eq j'incre a hi-fi MODEL and I kind of like I want. Also I prfre to switch on the EQ position because it has many more nuances, one its finest.

short good for beginners it's not bad, and the power is l.

I use it since 2001.
what I like most is when the same choice rge enough the level of saturation, and the crunch pretty cool, especially since it Ragit DIFFERENT well with levels of play for against I'd love a real good amp ...

See all 33 photos of Session Sessionnette 75 »