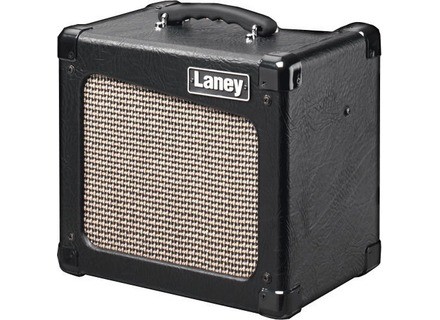 Laney CUB10
5
10 watt lamps
it's not a powerhouse despite 10 watts
Hi lo gain and gain entry
A tone control, a master volume and a gain

It is perfect for urban use because of its moderate power.
The advantage of these small tube amp also comes from their small HP that do not require too much volume to vibrate enough for me 12 inches are unsuitable for apartment use.
Its got with this amp is round compared to what is in the range of small tube amp
The resulting clean sound is very nice, it's obviously not as beautiful as the sound of a jr blues, but the fender mind is with this particular side in the sound
As to the crunch we are more in medium tones, however I find this amp is more interesting when it's crunch with a pedal that natural saturation.

I compared this amp with virtually any existing models in 5 watts
This is clearly a more credible in clean and clear sound through this we can say that it is versatile when using pedals
After in quality and finish is very respectable, the effort was made longer on the sound quality finishing materials, and that's good because it's the sound that counts most.
The price quality ratio is unbeatable, paid 189 euros to the tube amp is really interesting
Did you find this review helpful?yesno
»

Laney CUB10
5
sufficient power to produce subject to be taken for important scenes (vs often make large scenes?) ideal for small gigs ... any style and still ormis metal (effects) ... for me three buttons are sufficient and one too many mediocre .... hp, amp 180 euros can not see a team of quality ... hp hp acting for at least 50 percent on the sound, it seemed interesting to replace (my choice a weber) ... the hp output is more ... this amp is similar in size to a field delivering a power of a princeton, very convenient to move.

more than simple ... you plug it in and play, no surprises and taking his head for if you make the stage ...

I play mostly rock, country blues .... telecaster, strato, gibson j .... equipped to p90 uses a small indisensable for me reverb and a boost for the lead ... the sound is kind fender with less brightness (princeton field, deluxe ...) ... so a sound, but the one I like.

j 2 possesses in that I use the following single condition or 2 Incentives ...
purchased each room 100 euros secondhand. , Replacement weber 130 euros per hp .... a great amp for 230 euros ... it suits me perfectly optimized to max size and ideal for me.

klontr's review (This content has been automatically translated from French)" Good but some flaws ..."

Me, I leave the tone at 10 and I just do the balance gain volume depending on the style. The power delivered by quite appreciable in the apartment ', if you push the gain AND the volume, it sends already very strong.

I find the tone knob pretty accessory with a telecaster it can be be useful to moderate acute.

Against by the two inputs give a very different result. It gives me a good point.

The receiver accepts the good effect by its rather neutral tone.

I often regret not having a little reverb ...

The sound is good, not too bright either. I have a stratabound that sounds pretty vintage, rendering is super sharp and do not puncture my eardrums. The crunch is really nice and creamy, I love. on the other hand, it should not ask for more.

I think this amp would have earned accommodate a little clearer hp (the Celestion tube 10 is rather dull). Bonton of the tone would have been a real potenteil.

WARNING: If you use a guitar with humbuckers, it is better to have a good definition, because even with the tone on the amp to 10, it remains average. I had this problem with a Gibson SG and a good archtop, I feel like the tone on my guitar 5 ... If I keep this amp long enough, I'd consider putting an jensen hp.

I have this amp for less than a year, I use little by lack of time. Overall I'm happy even if I'm sometimes a little frustrated definition side. My next skyscraper will house P-rails with Seymour Duncan, if the sound dual mode does not satisfy me, I change my amp or I change my hp.

Otherwise, with simple or P90, it works very well.

To clarify the concept, I&#39;m the guitarist in the cartoon room, no beef, no concert, I play only one home. I live and I have no apartment neighbors.
I use Amplitube on my Mac, it works fine but it lacks guts. While I play my other half can not messing around with her friends on FaceBook, and then type riffs hooked to an M-Audio FastTrack&#39;s the way it anyway (what rock and roll shit!)
Amp so, but not transistor (modeling or not) because I side modeling everything you need on my Mac (including game headphone), it&#39;s that I want tripe.
Amp tubes and therefore please.
Usually when someone in my case poses the classic question "What is like a tube amp used in the apartment? "Is how can He replied that he must not buy a transistor etc. ...

Vox seems to have been the first to say that baby boomers (I am) played the guitar in their youth and now they are Quincas, will come back and that therefore there is a real business to come in small amps tube, and Lil Night Train to the last (and super cute) AC4C1, the Britto-Japanese chinoiserie multiply nice.
But I have a little trouble with his Vox. It&#39;s great for the crunch, but the tangy side of Vox bother me a bit in the clear.
There Fender, who has not really yet taken the measure of the trick and is satisfied with her Champion 600, very well indeed cute and all but one button. One button, it means that a given noise level, it has only one sound, and in this apartment, it&#39;s still average.

And then I came across a secondhand gold, given a quasi CUB10 Laney, and almost new.
Given the price, I buy by telling me that I was not taking a big risk, and at once the sky cleared, the air has become cleaner (not the cheapest beer unfortunately) .. brief revelation.
The CUB10 is an amp like Fender used in the apartment and with the possibility of a little cruncher (basically this is what would be the Champion 600 Fender if marketteurs were smarter)
Fender yes because it sounds like a Fender (which is related to lamps that uses 6V6) but unlike the Champion 600 has three buttons. Tone has a little effect, a gain that much and has a volume.

Basically with everyone at noon (say the volume of 4) can égrainer arpeggios and jazzy blues with a light clean to fur without triggering a civil war.
You turn the gain knob on 10 and restores the volume to 2 and then it gently crunchouille always with a volume of apartment on foot. To some riffs in his living room is really credible

Right side of the scale is not a wall of Marshall red-hot, the HP is very small (10 inches) and average breath away (but it is precisely its low yield that can make cool stuff at home)
There is also a speaker output for more serious uses.

The finish is clean but it is a chinoiserie, it is clear that this is not for the castagne (but it&#39;s not in my room brawls) Mine has LED Start weakling (this is why I &#39;lai paid cheap) and consulting els forums is a disease very Laney. The corners are plastic etc etc. ..
In short it&#39;s very pretty cheap all over, but the cheap anyway, but given the price ... eh

What does no harm is very small and has a nice face.

I use it with an Epiphone Elitist ES335
The sound is very Fender, a bit less fat than a Champ 12 (my previous reference)
We can get clean sounds very well and pushing the grain, even apart from this volume nicely crunch

Previously I had (I always sell it to) an old Fender Champ 12, but as the Champion 600 he has only spent a single volume and the walls tremble. Too bad because its clear sound qiue fat is great. Drawback, it is impossible to do cruncher (except to be ready to get kicked in hours).


A rating below says "this is not a Blues Junior" .. this is true and this is fortunate, in a Blues Junior apartment .. how to say ... it takes off the wallpaper, not CUB10.

If it all over again? well if it all over again I would do without hesitation all that saw its price secondhand one can pay for a CUB10 sounds more Fenderien AC4 for a more acidic stuff and all for little brouzoufs .. it is not life grand?

Did you find this review helpful?yesno
»
Read the 7 user reviews on the Laney CUB10 »