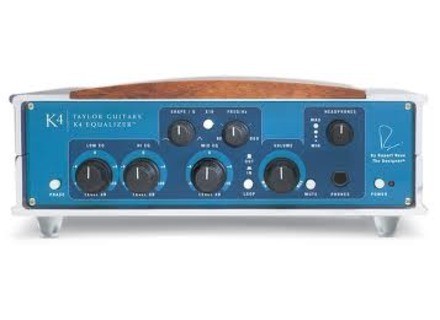 Taylor K4
4
Transistor preamp with transformer coupling in and out.

The knobs are weaklings.

So now, I cracked and broken piggy bank to know.

* Is there a better Signal to Noise ratio: NO (or worst)

* The preamp is transparent? Yes & No.

With all zero means that the sound is softer (I say "mellow +")
1) is actually the effect of the processes which cut the strip. It loses the "air" but a lot of aggression. You lose a bit of momentum but still retains the definition. I would say that the cost is a bit of compression due to the transformer but it is very musical (not like the cheap transformer to match the impedance that can sound "liquid" on high notes)

So, it is a matter of taste.

If you like air arpeggios almost metallic sound that can be obtained with a Taylor and a good amp, well the K4 is not for you.

If you find that the sound of the ES is too aggressive and take the whole place, well it's not bad. it softens without damage, it remains soft and natural.

Does it helps to sound like a piezo: I would say not. While the piezo pad and saturates but the rendering of K4 is around-the-subtle.

For EQ I have not too triturated, it looks to the taf. It is also very fine so I have not had time to give me a full review.

So I tried once so I do not have a final opinion.

Is it distorts the sound of the guitar: Yes. (Does not count on it for the sound of Martin)
Does that sound: Yes but it also depends on what you're looking ...
Is it worth the price, I think NO (it's super cheap!).
Is there an equivalent on the market: NO, you pay for transformers and Neve preamp, not the EQ.

Conclusion: it must be possible with a Jensen or Lundahl transformer NE5532 and obtain an equivalent result (to my untrained ears ... I know the fans of Rupert Neve will cry foul ...)

I no longer have my AER Compact 60 but I think it would go well with (it would calm the EAR that sounds acid with ES). With the SR JAM 150 tech it is discussed ...

NB: There is no photo with PreSonus EQ3B on the other hand (owned and sold) that's for sure.