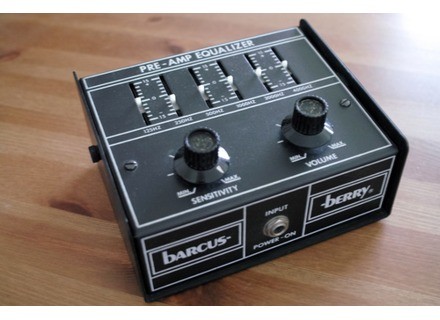 The connection is simple: an input jack that also acts as a switch and output jack. Power is supplied by two 9-volt battery (accessed by removing two screws), there is no plug for power supply but it is easy to add one if necessary.

The case is solid metal, it also seems new in 2013 when it dates from the late 1970s. The space is important.

The principle of operation is simple and self-explanatory. The EQ sliders are very sensitive.

The 1330 model is criticized today by the limitation of its two-band equalizer. I've never used but I think with the 1335 Barkus Berry had largely alleviated this problem. Equalization is accurate and efficient. I use a guitar with a piezo bridge set + preamp without EQ (Fishman Powerjack) albeit very good but that still sounds a little piezo and effectiveness of the equalization of 1335 provides some something much more realistic.

I also use this pre-amp with a more or less close to the technological level of the year output sensor: a micro chip Shadow SH-771 is characterized by a relatively low output level and a fairly linear response. The first surprise is the level of pre-amplification available: one really gets to wake up and reach the microphone (with a good supply) level of usable output. The second is the effectiveness of equalization which is very sensitive and each band has a wide range of action: all that really can catch the shortcomings of the sensor.

No breath is generated and the manipulation of controls does not cause cracking: beautiful on equipment that is forty years old!

I use it for a few months. I bought initially by curiosity but it makes me great service. This pre-amp date of late 1970 and has since created a lot of other signal processing for sensor piezo but I am forced to recognize that while this method of amplification was still new to the time (the first electro-acoustic Ovation in 1972), Barcus Berry was able to offer a product that remains strong today.