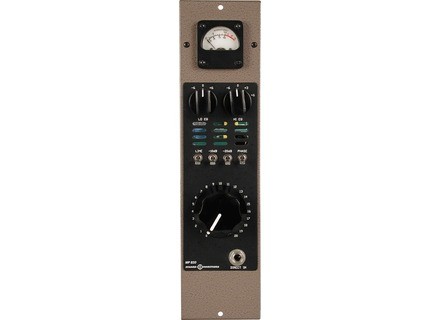 Inward Connections MP 820
5
The Inward Connections MP 820 is a microphone preamplifier that is little known but has a huge sound and is up there with the best sound preamps that I've used. You can't really buy these in too many places, and they need to be placed in a custom rack with it's own power supply and all that. The studio that I work at has a chain of the Inward Connections 820 series modules that includes this preamp, a compressor and an EQ, all of which are in the same casing. It also has a 1/4" input in the front for going direct.

The make up of the Inward Connections MP 820 is pretty simple if you're familiar with the general configuration of mic preamps. It's got a large knob for setting your level and also has a simple two band equalizer for boosting or cutting high or low frequencies. The high EQ is stationary at 10 kHz and the low is at 50 Hz, so while it's not very flexible it's definitely nice to have. The MP 820 also has switches for mic/line selection, phase reverse, and both a -10 db and -20 db pad. It also has phantom power build into it. A manual shouldn't be necessary here...

The sound of the Inward Connections MP 820 is nothing short of outstanding. It's got one of the fullest sounds of any mic pre that I've used before, and when you get it in the chain with the 820 compressor and EQ, you've pretty much got the perfect recording chain. I love using this chain for vocals as it's almost always my first choice to use the full Inward chain since it just sounds so good. It's definitely a versatile enough pre to be used across the board, but it really excels for recording vocals.

Unless you're going to build a full Inward Connections recording chain, it's probably not worth it to just purchase the MP 820 since you also need the casing and the power supply as well. However, even just adding the 820 compressor in the mix will make the price a bit more worthwhile. There are definitely easier ways to go to get a great mic preamp, but it would be really hard to say that a pre out there sounds better than this one...
Did you find this review helpful?yesno
»