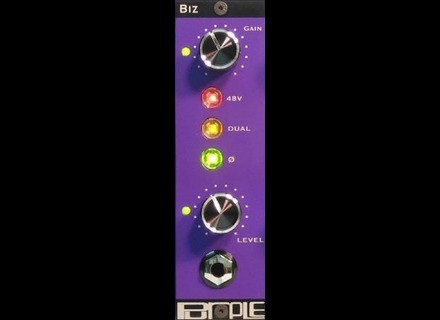 Purple Audio Biz
5
Purple Audio's Biz is a single channel microphone preamplifier made up of only analog parts.  The unit is made to fit in a lunchbox style rack, rather than a traditional rack space.  It has XLR connections in the back, and a 1/4" input in the front for using this as a direct input box, which you can choose to use at either 33 Kohms or 100 Kohms.

If you understand how to use a basic mic preamp, you'll be able to use the Purple Audio Biz without hesitation.  If not, this is an easy enough pre to learn on because it has a pretty simple make up.  It's got knobs for gain and level, as well as buttons for phantom power, phasing, and 'dual' which gives splits the gain up between the two amps inside of it, for a slightly different sound and make up.  It also has a switch to choose either mic or line input.  Not too much more to say about using the Biz as everything is pretty self explanatory and the use of a manual isn't necessary.

The sound of the Purple Audio Biz is definitely top notch, especially for a mic pre in this price range.  I've used it only for a few applications, as I don't own the pre and have only used it a few times in a recording studio.  Of all the applications that I used it for, I found that I liked it best on electric guitar for whatever reason.  This isn't to say that it didn't sound good for other instruments, as it also sounded clean and clear on acoustic guitar and mandolin.  There isn't too much you can do to change the sound, but it is nice to have both gain and level knobs, and the 'dual' button is a nice little feature as well.  Overall, the Biz is a great sounding mic pre that I would imagine could be used in just about any situation.

It seems like the lunchbox style pieces of outboard gear are becoming more and more popular, and is the only one of its type that I know from the Purple Audio company.  This is a perfect little compact mic pre, and is one that I really don't have anything bad to say about it.  It is well made and gives you a true sound.  That's all I can really ask from a mic pre, so this is one that I would wholeheartedly suggest for those with or without a lunchbox rack.