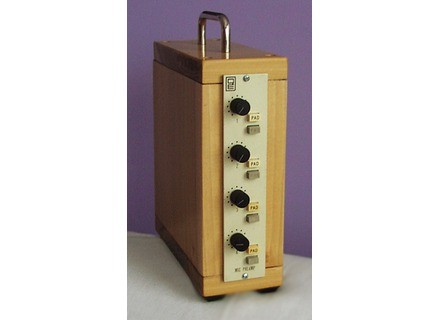 These are really simple preamplifiers to use, as the Quad Eight MP-404's that I've used didn't have any equalizer and just had the preamp. The only parameter in addition to gain that was available in the specific MP-404's that I used was a pad, and I'm not sure exactly how many decibels the pad would take off, but it did an adequate amount of attenuation when needed. In addition to the external power supply, we also have a phantom power for these when needed. A manual won't be available, unless you wanted to find the original console manual.

The Quad Eight MP-404's have a really nice sound to them as preamplifiers. I can't really say that they have their own sound or anything, but they also seem to do a pretty good job no matter what the application. While they are never my first choice in the room that we have them in, if I need a few extra preamps in addition to the Neve and API stuff in there, these will usually see the action. They are definitely pretty clean sounding, but not like an SSL clean as it has more of a vintage type of sound.

I don't think that there are many Quad Eight MP-404's out there, but I really don't know much background information about them. I don't know if these consoles are still around even, but since we have a few of them on site in one of the studios at the studio complex that I work it, I've had the chance to mess around with them a little bit. I wouldn't recommend trying to track down these as it probably isn't worth it since they aren't the most unique preamps, but they're absolutely worth using if you've got the chance.
Did you find this review helpful?yesno
»