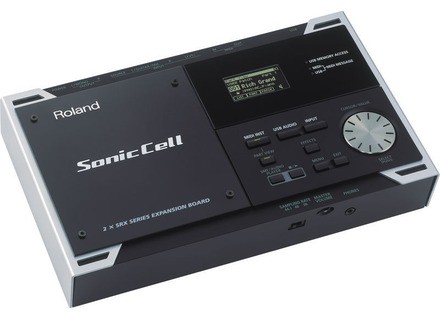 All user reviews for the Roland sonic Cell

Average Score:4.4( 4.4/5 based on 7 reviews )
Value For Money : Excellent
Not satisfied with those reviews?
Our members also liked:

Roland sonic Cell
quite the are can be edited either by pc or mac. has about 700 sounds and the effects it will EQ compression through the delay, chorus ... comprehensive

simple configuration and super convenient. The manual is the weak point as in English. But I was really surprised to have taken over a very simple and fast way

sounds and expression are excellent especially the acoustic power.

a general way I would put 9 because its very good quality with a sound and precise map settings. You can also connect to the sound card and another instrument microphones

If I did not make the choice for native software reasons, I would not put up for sale my expander. J have transplanted half of sounds to create one note samples and use them on native it took me a crazy time but I wanted to keep as even some native sound is not as good
For the price at first it seemed expensive, but when I realized the sound card equivalent quality compared to his almost 66 Great rates

pic&pulse's review (This content has been automatically translated from French)" It's Roland, what."

Roland sonic Cell
4
Expander table. The ROM Fantom X slots with two SRX and function USB sound card with two audio inputs (one XLR / Jack Jack and1. 128 voice polyphony of 16 channels playable.
You can mix live inputs and apply the internal effects.
SMF and audio on external USB media player.
The editor on MAC or PC is provided.
It is therefore a general ROMpler with a large bank and fully editable like any big synth brand, with VDF, VDA and others fully configurable.

In practice, given the ergonomics, it is quite complicated to use alone. The screen is ridiculously small and provides too little information compared to the possibilities and the logic is ... particular. It's like back 20 years ago in the era of screen 1 line of 12 characters.
Once plugged into computer, then has a complete and well done editor that allows you to use the tool thoroughly and without difficulty.

Difficult to turn all sounds available as they are numerous, but the overall quality is very good (Fantom X) and are widely applicable. The bandwidth is extended, the sounds have presence, are well defined and do not squeaker. We find some of the history of the pimp with waveforms date from JV, D50, JD and co. Not easy to get by against very nervous or aggressive sounds, because the envelopes a little soft.
The editing is very significant potential, we can make a nice bank characters sounds. Using MIDI controllers, there is a beautiful expression (standard GS plus four assignable controllers)
Unless you want to make it sound like a Korg, Yamaha or a Clavia, I find it very good.
Each judge the realism of acoustic sounds. Nowadays, with the banks computer, hardware .... I will say that for live use, it is enough.

I used to live (very heavy rock style) in addition to a Yamaha Motif ES8 and small Korgs. It is necessary to prepare the patches at home with the editor and it is quite tedious to edit live, but apart from these restrictions, it is an expander that sounds great and has a beautiful presence in the mix with sounds never ridiculous.
I just use the function soundcard. It is clean and transparent enough. The combo XLR / jack is practical with its impedance control and phantom power.
New, it may be a bit expensive but it is present on occasion seen its coast.
I agree.

For basic functions, the Sonic Cell is fairly simple to use but I think using 20% ​​of its capabilities because it is very complete (and complex).

I am very satisfied, I even adding a sound card SRX02 it!

Esprit-Libre's review (This content has been automatically translated from French)

Roland sonic Cell
4
the Sonic Cell is a good product for money,
sound generator, for use on your PC in VST, midi, sound card,
I use it mostly for research melodies at the keyboard, creating his too ... It is versatile, useful for the concert is over Herd
side via usb2 card, it works in 24 bit 44,100 khz 48 khz and 96 khz ..
2 line microphone guitar ect ...
For anyone seeking a sound generator not too expensive I board, ideal for portable rest ... the icing on the cake, using a USB key you can make a very good mp3 player: yes

op, the trick to have an operating system to date and clean &%&%& % &% the sound suits me, I find certain sound weak, but there are expansion cards, the effects are good

less than a year, I use it mainly to work the keyboard M-Audio 88es
Good quality product discount

gibs33's review (This content has been automatically translated from French)

Capricious reading, tempos non respects .. (compared to other devices of same functions that I use with the same carefree programing or sequences)

"I aprends" to understand and use for one week ... in complement of sequences drive on computer
I have several machines of this type, floppy drives (completely surpassed), readers and other sounds on marques..mais oh how much more obvious, realistic, less capricious.
report / quality Price: bien..mais noting the complex reactions and ways sounds of the machine, which is it for?
Reading mp3: Well, programing playlists: good
despite its attractive price for this kind of device, I do not have that choice.
Did you find this review helpful?yesno

ssebs's review (This content has been automatically translated from French)

Roland sonic Cell
4
Module 16-channel voice synthesizer 128 (called "shares")
See the website Roland https://www.rolandce.com for details.
What is interesting for me:
- Audio input and audio interface (via usb) to 24bits/96Khz (note the frequency is set by "hard" via a switch on the front).
- 768 256 sounds and 20 drum kits 9.

What is unfortunate is that there is an entry, it would have been cool to have a line input + micro (but hey you can not have everything at this price ...)

I use the sonic cell free pc to play with my piano (a Yamaha but I just ordered a 700 gx), for it is quite intuitive editing provided it uses the sounds without too much work. Editing is done with the click wheel.

I use a laptop to compose and record (with Sonar homestudio). The VST version of the editor is a little scary at first, like dashboard airbus but it's fairly normal given the number of editable parameters: this module is not misguided synthesis. For now I use a bit of potential, it must be said that the doc is a bit too minimalist and it takes time to get to test the effect of any parameter if n is not a program of synthesis. But at least the advantage is that you can change many settings.
For some graphics settings I would have preferred more meaningful than numbers especially for the velocity curves.
Latency (in Asio): ok when I do that recording the final tracks all morning. on the other hand, if I record MIDI tracks one by one, and especially the tracks from my RD700 (then plugged into the line input of the sonic cell), then it goes bad and I had to put the buffer fullsize -otherwise there were little "clicks". I have not succeeded in eliminating from bp in WDM.

The acoustic piano sounds are varied, but are unclear on the attack for my taste (I have a very good headphone and I find that the attack sounds a bit too much like an electric piano), and this is worse than I ordered the 700GX example. The sounds are not upscale, but the advantage is their large numbers.
For synth sounds, I find too electro-oriented for my taste (not much to play the JM Jarre, for example)
I paid an SRX Symphony to compose and then a lot of rope out really well (special mention as the oboe very realistic).
The sounds of church organ disappointed me (and some not top quality), it is also much better with the 06 SRX.
The effects are numerous, they can be routed in many different ways (I have not tested all that).

I have the sonic cell since late December 07.

I like:
- The variety of sounds with their overall quality
- Major editing capabilities
- The fact that it is sound card via USB (no D / A conversion for recording)

I regret:
- Slow loading VST (sync with the sonic cell) at the opening of a project Sonar
- Max volume too low either for audio output or headphones (headphones really fair to use a good headset so with a high impedance). We can fix it via "system", "output gain" at a price of breath (and hum) ... obviously
- Too bad there is not a memory holding the last setup (in computer music must each start to activate "midi-> usb thru" menu "system" for example).
- Not enough memory "performance" (32 +32) for my taste: it's already just for me to play my partoches at home, so totally useless for someone in concert! Roland could increase the memory or it can be stored on a USB stick.

Velhon's review (This content has been automatically translated from French)

The module can be used without PC, which is what I do just to play, select the patch as it really easy with a few buttons faade.

The manual is generally trs good, even if sometimes a lack of dtail (eg pseudo-FM, said poorly I think).

The sounds are excellent, I use mainly acoustic, strings, guitars Scheer, organ, piano, there are many choices and high quality trs: Deutsche guitars are simply sublime for some ( expressiveness bluffing), there's also heavy in the trs organs (the large pipe is duly carrment), some of the pianos are terrible as well (the ultimate high is my prfr) , there's also the lead synthse (in samples Obviously, this is a ROMpler), there's the possible modulation via LFO particular.
The multi effect is provided trs, trs complete, and a great quality trs your exact trs trs is always good in terms of quality.

Everything is Settings, the VLOC min and max for each tone (4 tones for a patch), the keyboard part for each tone, curves, effects, short, for a ROMpler can paramtr many many things, but if you do not want, we can well do without trs.

I took this unit two months ago, as a source dedicates to acoustic sounds, and I'm not, if I need a cathedral organ, a flamenco guitar, a piano concert of brilliant, or a set of pizzicato strings, I always finds its ultimate for me.
The other main advantage of this ROMpler is a digital audio interface: it records directly though the usb in numrique without problem analog (cblage, wind etc), and one can connect a Stereo source, so recording a plug-in also numrique. For my part I have plugged my Nord Modular G2 engine, suddenly I have a recording platform numrique really practical to make the recording of good quality trs trs.
If I had the choice again, I would resume the MODEL as it is extremely comprehensive, trs trs a good quality in the bottom as in form, and it is a production tool alone.