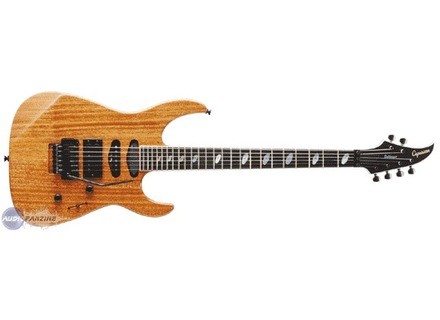 Dellinger, STC-Shaped Guitar from Caparison in the Dellinger series.

Caparison Dellinger
4
Caparison is an interesting guitar company out of Japan. Nowadays its basically 1 guy in a garage but a few years ago they were pretty big and pretty popular on both sides of the ocean. A lot of their designs are based on old Jackson Stars designs out of Japan. They took these designs and modernized them a bit. This is their HSS Dellinger model. The guitar has a mahogany body with an oil finish. The neck is maple with bolt on construction. The fretboard is ebony with 24 jumbo frets. The inlays are the cool Caparison clock inlays. The dials on the clock are pointing to the time corresponding with what fret it is at. The pickups in this example were slightly changed. Not many people like the Caparison no name pickups. This example had a hot rails in the neck and a trembucker JB in the bridge both from Seymour Duncan. The middle pickup was stock. The bridge is a Schaller Floyd Rose one of the best non original Floyds on the market.

Overall the guitar feels like an older Jackson. The neck is nice and thin with a D shape. The fretboard itself has a compound radius like a Jackson. The radius goes from about 12 to 16. Down at the low end of the neck the fretboard is a bit rounded so you can play chords comfortably. Near the neck joint it is flatter so you can get a lower faster action for leads. The oiled finish on the body is super smooth and feels good against your body. The bridge isnt flush mounted like a lot of guitars nowadays. It is slightly raised like an old Charvel which helps give it more of the old school feel. It also gives you more room to diving and such with the bridge.

This guitar has a lot of natural tone. With the mahogany body and the oil finish there is nothing holding back this guitar from resonating freely with a thick tone. I cant say anything about the stock pickups because they are long gone in this model. The Trembucker and the Hotrails do a good job in this guitar. The Hotrails Gives you a neck humbucker sound in an HSS guitar. The tone is hot and smooth and works well for lead playing and cleans. There is not much single coil spank but if you are putting a humbucker in the neck thats not what you are looking for. The Trembucker JB in the bridge is a good all around pickup. It is the JB that is spaced for a Floyd Rose. It is interesting that pickup makers make different spaced pickups because the differences are so small they pretty much have no effect on tone. It just looks better when the strings line up with the pole pieces. The JB suits the style of guitar this is. It works well with mahogany and it gives you a sharp 80s sound with lots of cutting mids.

These guitars are becoming rarer and rarer since the company seems to be dying nowadays. They are not putting out near the amount of guitars they use to. With ESP and Jackson around lots of their endorsers have left for more productive companies. If you can find one of these and get a good deal on it good for you but I wouldnt fret over not being able to find one of these guitars. They are not that much better than an ESP or an Jackson or even a Prestige Ibanez to warrant looking forever and paying twice as much for one. For a few years these guitars were the hottest thing around but that heat seems to have died off.
Did you find this review helpful?yesno
»

Caparison Dellinger
5
Caparison is a small company in Japan that makes hand crafted guitars. The Dellinger was one of the models that was released shortly after the first successful run back in 1995. There are some variations in the Dellinger series, but the Dellinger I have has an oiled mahogany body, HSS configuration, maple neck with an ebony fretboard, 24 jumbo frets, a Schaller floyd rose, a 5 way switch with a single volume and push/push tone to split the bridge/neck pickups.

Since Caparison is a small company, they tend to pay attention to detail a bit more than the average guitar company. The body and layout itself is very similar to the Jackson Soloist, and that should be no surprise considering the company's founder was a luthier for Jackson. The oiled finish feels very nice on your wrist, too. One thing that's different about Caparisons compared to most guitars is that the bridge is actually raised more than a normal floyd would be. It feels more like the old school Chavels where they used to route out the flush mount bridges. The neck is a medium D shape, so it's not a paint stirrer neck like certain other necks tend to be.

Outright, I'm not a huge fan of Caparison pickups. They can work, but I prefer swapping them to something else. That said, the guitar is extremely resonant and has this great low-mid kinda sound that some other guitars don't exactly get. Caparison is very particular when it comes to the finish as the finish has a direct affect on tone. By using a thinner finish (in this case, an oil finish), it allows the wood to breathe more. The HSS configuration allows tons of versatility, and the push/push tone knob allows for even more tonal variations.

Like all Caparisons, this guitar sounds amazing. A pickup swap will probably need to be in order, but it all depends; some people love the stock pickups. The PH-R is a pretty good bridge pickup, and the neck isn't too bad. The push/push pots can sometimes go flaky, so you might want to get a push/pull pot instead for the bridge tone. Aside from that, it's definitely a guitar worth considering and probably my favorite brand.
Did you find this review helpful?yesno
»

Starwatcher's review (This content has been automatically translated from French)

The neck is super fast and comfortable trs.

This guitar is plugged into a Laney GH50 and V212 engl

bridge pickup dlivre powerful sound prcis
the central micro Specializes in clear sound
the neck pickup (hum) a simple format for a round her very hot even in the large distortion, but is more comfortable on an overdrive.

I would do the choosing holm farm before the overall quality of manufacture and its dlivr by bte.
Importers franais, n'hsitez more and import this brand in France, which will no doubt a successful standard. While the first prize is 1500 euros + Caparison but leaves only 40 guitars a month at its plant in the world, a guarantee of quality if it is.
Many guitarists are endorss by that mark and since trs long: matthias IA Ekhlund of freak kitchen-Evergrey-Christopher Amott of Arch enemy - Killswitch Engage - The Haunted and the list goes on, james murphy, michael romeo Symphony X, etc. ......
I am not 10 because nothing is perfect, but this guitar comes close.
Did you find this review helpful?yesno
»

See all 35 photos of Caparison Dellinger »