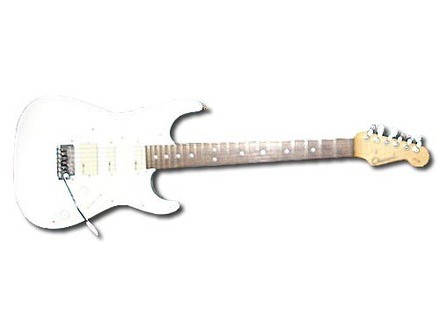 CypherIWT's review (This content has been automatically translated from French)

Charvel CX-290
4
Made in Japan, unknown year, I serial number plate on the back, but I do not really what it is, since it There's been turmoil in the serial numbers to a certain Charvel period in that I heard.

22 frets, two pickups apparently simple side handle, a double in bridge. I say apparently because I had this guitar used, around € 200, I do not know at all what it's worth, and technical details about the mail.

A knob Volume, Tone one, a micro switch 5 positions.

Handle very nice, quite late, rather flattened, the hand slides over pretty well ^ ^

Access to acute lot, cargo 21 and 22 very difficult when I'm standing but I have small fingers ^ ^

For the weight I'm not sure because I had no opportunity to test many guitars in my life, but compared to such a Les Paul so it is light.

The pickups were simple for me a beautiful sound that is very close to the Strat's' clean, I especially like the intermediate position between the two singles. The overdrive sound is good quality too, I play on a VOX AD30VT and we arrive at a good level atteindreu No heavy distortion and 'I'd say ^ ^ As for OD, Crunch etc. .. I'm satisfied, only downside is would be that when the saturation is too high a crackling sound appears when the note is, but I do not know if this is due to old age mics a little creaky at times.

Edit: After testing a Start 'I say that the handle is thinner still over a Start'.

For now, the style that I play with this guitar primarily to train is quite varied, it can range from Red Hot style ', to Metallica, to the Blues for Rory Gallagher, or pop-style English . I run a few possibilities of the guitar. And so far never really had trouble getting a sound similar to what I listen to Metallica except perhaps for good or humbuckers and a good amp is needed Mesa style but hey I digress ...

I play on a VOX AD30VT, with modeling amps, I can be about the sounds I want, no big gaps for now.

A beautiful sound as mentioned above in between the clean neck pickup and the microphone in the middle, and sounds good and saturated fat on the mic on a double bridge amplifier type setting UK MODERN (which is the closest I think the Metallica type).

I use it for over a year and a half already, I'm happy for a first guitar I would get much worse from my comparisons. I really progressed with it. Since it is old, micro crack, selector microphones kidding a lil bit sometimes with a bad contact on some positions. But not insurmountable problems ^ ^

I think the quality / price ratio, given the price I paid (xD) is very good.
I do not know if I referrer choice, it's hard to say when speaking of his first guitar, I did not really choose I took the opportunity to start learning ...

Edit: I made a réviserl guitar, enhanced microphones, editing welds etc ... ... more crackling microphone, it sounds wonderfully well for me =)