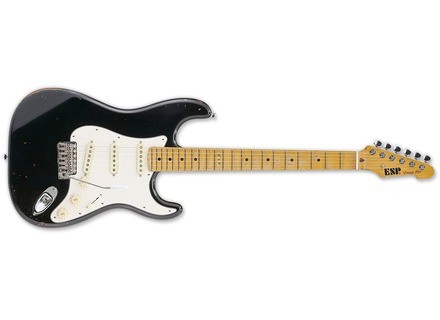 ESP Vintage Plus Maple
4
ESP has had their Vintage Plus line up for quite awhile now. This is pretty much the same as all the other years, but they're starting to age them which adds a real cool effect to them. It's like they're broken in from the factory. The guitar features an alder body, a maple neck with a maple fretboard, 22 frets, dot inlays with an ESP logo at the 12th fret, a vintage style tremolo, three single coil pickups, a volume, two tones and a five way switch.

The guitar is put together great. This actually has that modified neck joint that ESP likes to use. It's kinda like the current MIA Fender neck joints, but I think ESP might have been first. I'm a bit rusty as to when Fender started adding their sculpted neck joints. It makes accessing the higher frets a lot easier. The fretwork on this was done quite nice, but the model I had was actually used, so there were some divits in the frets. The finish on this has that aged finish, but the wear looks fairly realistic. Some of them I've seen with too much wear, but this looked pretty normal. The vintage trem won't stay in tune like a floyd, but it does its job. The locking tuners help out quite a bit.

This guitar comes equipped with Seymour Duncan SSL1 pickups. These are pretty killer singles. They work great for blues, jazz and rock. The bridge is fairly bright sounding, and it has a great snap to it on the high end. Rolling the tone knob helps combat the brightness for those who are looking for a bit of a thicker sound. The middle pickup is something I never use on its own, but it combines nicely with the bridge and neck for those funky kinds of tones. The neck is cool for cleans, but I struggle with it for leads. Personally, I'd like to at least have an SSL5 in the bridge to give this guitar some more beef and boost the lows a bit. Still pretty good sounding, though.

I find that these ESPs tend to deliver a more consistent tone and quality than the Fenders of today. The fretwork is better, the sound is solid and they play great. If you're looking for a strat style guitar, I highly suggest you check these out. There are some great Fenders out there, but you'll probably have more luck with one of these guitars.
Did you find this review helpful?yesno
»