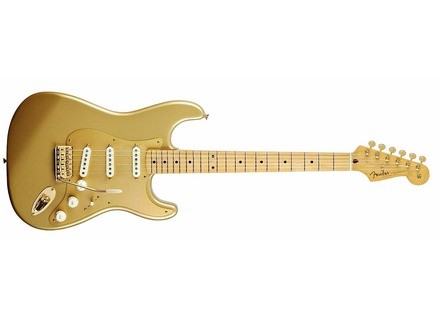 Mac-Ghis06's review (This content has been automatically translated from French)

Fender 50th Anniversary Golden Stratocaster (2004)
5
Mexican guitar has 3 pickups with a normal round.
Golden desert and is one of the most beautiful guitar that I have seen.

I jou mainly jazz, with a good sound setting you can reach a smooth and well.
for blues and rock, is a strat so beautiful .....

I used the past year or so, and I have to following it out at least one faith daily.
She has a face of tro enfer.et for € 700 it's worth it. And little more tearing is that it's a limited edition.
Did you find this review helpful?yesno
»

Based on the Custom Shop model HLE (Homer Haynes Limited Edition) (http://www.stratcollector.com/scn/models/hle.html) made him a very limited series in 1989 for 35 years of Queen Stratocaster, he lists the main characteristics ...

Produced in Mexico from January 2004 to December 2004, it is the high end of production "Chicano" with particular attention due to this limited edition ...

Its quality is far superior to the low or mid-range US!

About its finish, there is nothing wrong, it is exemplary! The patent of the handle is just perfect and the body has no visual defect!

It comes in a Gig Bag Deluxe 50th Anniversary ...

The handle: A real treat ... V-shaped, very thick without being a pickaxe handle. Everything passes, thumb on top, jazzy arrangements in the 10 th box, the solos!

The body: it stratum with all the comfort and ergonomics that it has ... are there more comfortable in solid body ?????

The gold hardware is simply beautiful and consistent with the model!

The pickups are very nice Alnicos but have given way to one of my beauty kit with Kinman Blues Avt (http://www.kinman.com/html/myProducts/strats.htm Bluesset #): Here, it sends Severe: The Sound Start with the gain, but without any grain 7ender Hum Hum beucoup warmer than the noiseless!!

I play Blues, Rock and progressive in Floyd, Genesis, etc., and for that, she excels!

I play plugged into Fender Blues Junior and I can tell you that the guitar sings with happiness in all the records ...

All the sounds of strata may be obtained with this combination of Clapton to SRV not going Gilmour, Blackmore ...

I bought this guitar because my old Strat Tie Us to Gilmour (http://monsite.wanadoo.fr/gilmour/index.jhtml) has a handle end, which to date does not suit me more because just too end!

With age, I want more thickness in hand with a draft of 10/46 since my game is less pyrotechnic and more Laid Back!

This guitar is simply that I was looking for his look, his violin, comfort, and spirit Vintage ... It is a real Stratocaster is totally in the spirit of the great Leo ...

With new pickups, it rivals any US serial, no problem!

Fender 50th Anniversary Golden Stratocaster (2004)
3
See other opinions.
Personally, the look was a little scrap n'tant not a fan since finishing "gold" in gnral too pat got my eye.

Let me begin prciser I do not possde this guitar, I just try to store a time when I was looking strat and I felt my the Mexican MODELS;

At first, on the run I t surprised many times I heard the lowing MRIT, by their finesse and comfort, the sleeves of strata, and although the I of t: indeed, the patent is qu'pais (I would say even rude) and the rigid handle: I was a little like having a wooden board.

when the weight or ergonomics, we find the specific strat CHARACTERISTICS: lgret and simplicity of Access in acute;

Similarly, the number of knobs is common all models of strata, and the vibrato. That said, it is not comparable to us (I've tried in the crowd for comparison), since the guitar is fairly easily dsaccordait, vibrato and more a DGIG impression of fragility.

Personally, I rather like the common CHARACTERISTICS: no frills, simple to use rglages issue, has done. j'enlve when same points because of the wooden board which serves as a handle, which greatly to the comfort of game (yet I am used to the sleeves because I pais possde also a les paul) and lower range of spices than MODELS us (mcaniques, vibrato).

Having a test amricaine in the crowd, I must say that even when There's a diffrence of her, whether at the level of tone (or "stamp" of the guitar) or power. This Mexican sound MODEL weaker than us, less grain.

the identity (or spirit) and Fender Stratocaster to be a good appointment overall, especially when you attack plans or bluesy psych (there is not a Jim Harley or a squier is s r, and also reassures ..), but with a sympathetic ear, especially when trying a amricaine in the crowd, one realizes the difference, that the MODEL we are sounding a lot more than some bland and MODEL us. In short, here was the sound strata off!

APRS essay I t's this guitar that I would not buy, never tried to Start it before, but with an ide at the top since m ' same as when information about them, I t surprised by the MODEL that did not match the image I made m'tais strata. I was afraid at the time, how could strat conqurir as much scratch as if mdiocres? I t reassured later by trying a MODEL us that, suddenly, this rpondait much what I expected.

In short, this is nice MODEL gold for collectors (original finish typing the eye, to love ... golden fan of deficits, the following strat gold.) Sounds better than the guitars really low class, gender sammick, jim harley or squier, but I know if was worth it because the rest of a fender on the cheap (it is near the trs MODEL 50's I also tried and found Equally mdiocre, dgouter of the fender discovering the novice MODEL!). In this price range, I guess we can do much better!
Did you find this review helpful?yesno
»

Pierre L.'s review (This content has been automatically translated from French)

A vintage vibrato (which dsaccorde little guitar actually), 2 Tone knobs of (neck and bridge pickups), a volume knob and a 5 slecteur positions.

Start a quite "Classic" in short.

The finish is of good quality and all dor is beautiful.

This is my Premire guitar so I can not really compare but I'll do what I can.

A handle on which it is relatively easy to evolve, Access in acute is trs ais (stratum requires). She is not heavy and trs fairly balanced and the body is built for ease of installation on the upper arm.

I was a player prt express scratching and I saw that we could get a good sound with this trs scratch even without too have used (it plays SG usual).

I play a little bit of everything and it's true that it is versatile trs, though for all that its a little mtal / distorted, it lacks a micro double ... But for all that is more light rock, blues, jazz see it sounds good trs. I play with a really low-end amp (Stagg CA-20R) but I could test it on a Roland Micro Cube o it sounds much better. It has the versatility of a stratocaster, ideal for beginners who do not yet know what type of music they play.

I am satisfied with this first trs guitar purchase, even if in hindsight I would take is a Les Paul guitar shape that would fit better what I want to do.

I use it for almost a year now and I have not had a problem.

I advise all fans to Start!
Did you find this review helpful?yesno
»