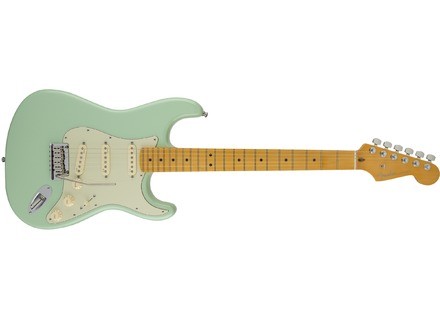 The neck is a V-neck, which is not common today, which is surprising to discover the instrument.
Used to it quickly, because it is extremely comfortable.
Access to acute is (still) a little easier than a standard because of the beveled attachment.
This guitar is a pleasure to behold, to touch and play.
Very light, very well balanced, Cany Apple Red color is superb: the photos on the Internet does not make him honor the red goes wrong and the pictures seem dull when he is simply brilliant in real life.
No fault found, and this is eight months that I use.
The sound is extremely delicate, with a grain more than a Standard, and more power as well.
The system S1 is not a gimmick and makes a range of excellent sounds (even a very old blues + / - 78 rpm it should be difficult to use)

I play blues, rock 50's and 60's, and the variety of pop-rock: this guitar can play everything, but you better have a delicate touch.
For the Hard-rock, metal or punk refrain.
It is fast approaching the sound of Clapton: crystalline, delicate and with a lot of attack if you want.
I use a Marshall JCM 900 and a Fender Blues Deluxe. Two different reports, both excellent. with the JCM is appreciated especially the media, with the Fender, of course, is the crystal.
All sounds (there are 10 different mic positions) are excellent, but I'm a bit skeptical regarding the sound I mentioned earlier, somewhat sour. It is good, though, and I think that studio you can find him useful.

I use it for 8 months.
I also have a Standard, which is excellent. The difference between the two? They are different, say the standard is clearer, easier to address because of a less pronounced grain. The Deluxe is a product ... Luxury priced very affordable in my opinion takes years to engage.

The value is excellent and I would do the same choice.
My only criticism: no jurisdiction and no control key provided. I found the tremolo too sensitive and to add a resort, I had to use one of those I had been originally supplied with my new Standard twenty years ago ...