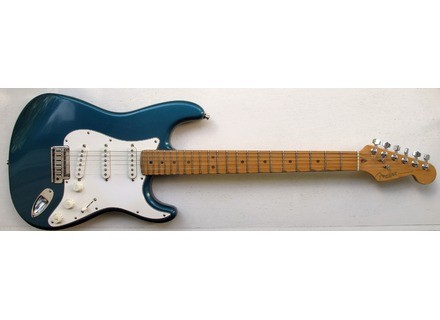 Fender American Standard Stratocaster [1986-2000]
3
I've been playing for about a year and have only owned one electric guitar so far and two acoustics. I play rock music and some blues. Playing guitar is awesome, and I try to do so as long as possble every day. I recently joined a band (not for sure a band yet, only two guitarists and one bassist) and the guitars include a squier, which is mine, and a silvertone sfb1. I'd say the silvertone might be a little better than the squier, but i've barely played the silvertone.

I bought the squier off of ebay for 150 bucks. This was a good price for what I got. I bought it since it was red and because it was a strat. I used to like strats a lot, but now i'm leaning towards les pauls.

I like the fact that in a year i've only broken one string on it, and that was out of frustration. I was trying to pick along with thundserstruck but ended up bending the string like crazy, which snapped the string. The tremello is great. I can put the toggle switch up all the way and make it sound like a les paul, or put it down and have it sound like a distorted metallica guitar. The original pickups sound awesome, and it stays in tune a long time.

The thing I don't like about it is the frets. You can't put the strings as close as you'd like to them without buzzing out, and it's not totally surfaced. I think it has a rosewood fretboard, which i wouldn't recommend to guitar buyers. Buy something a little more sturdy. And make sure you spend good money on good guitar strings. I replaced the B string and the one I bought sucks.

It has double cutaway and a white pickguard mounted to the guitar. The sound is great. It also has two tone knobs and one volume. Beside these is a four way toggle switch. The frets aren't too good though, which knocks it down in quality.

Buy this guitar if you like strats, but if you don't i'd recommend the washburn wi14 for beginners. They both cost about the same, so there you go. If you want to go fast with your fingers the washburn would be the way to go.

The guitar itself isn't bad for the price and is perfect for a beginner.

Tone knobs don't do too much to the sound. The amp is hurrendous! Turn it on to distortion and you get a growl when you pluck more than one string at a time. It plays sweet chold o' mine quite welll though.

The knobs on the guitar feel like they're gonna fall off. The amp is very poorly constructed.

A great guitar for beginners but after a couple of months when you're sure you wanna carry on with guitar-GET A NEW AMP! The guitar will last you a last you a little longer.

Fender American Standard Stratocaster [1986-2000]
2
I stole this guitar from a friend, well, i didn't really steal it and he wasn't really my friend.

This guitar is good to practice on. It doesn't sound great, and it doesn't always sound but it still works.

It is a cheaply made guitar.

Cheap components, durable body, and not too bad looking.

A good beginners guitar, but not for long.

It's a great all-around guitar. It plays anything you want from low-pitch rock to high Van Halen solos. It screams through with roughness when you want it to and smooths things out when you want it to. It has a 5-way switcher that helps with this feature. The neck is great. It slides like greased lightning, and has 21 frets.

Only that it doesn't quite have a deep, dark sound some metal heads want, because it only has single-coil pickups.

It has double-cutaway body, bolt-on neck, the works.

Over-all, this is a fantastic guitar. I would highly recommend it to any rocker out there, especially if you're into punk or even up to P.O.D. Just not death metal.

This review was originally published on http://www.musicgearreview.com
Did you find this review helpful?yesno
»
Read the 52 user reviews on the Fender American Standard Stratocaster [1986-2000] »