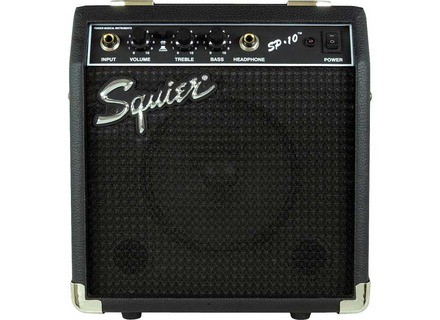 Squier SP-10
2
I bought this amp along with my first guitar - a Yamaha Pacifica - for about £40. I got it from Gamlins Music Centre in Newport, South Wales.

I bought it because I was a complete beginner at this point with no previous guitar experience. I just needed something to practice with, and this was the cheapest I could get.

Well...its cheap, and portable...and its got a little handle on the top of it to help you carry it. I have ran out of things I like.

It was great when I was completely clueless about guitars and amps about 1 and a half years ago...but now it has gotten to a point where I realise its not just me that sounds bad, its the amp as well. You have a choice of a clean sound, or a really crunchy distorted sound that really does sound bad. You get alot of awful feedback and you can barely change anything about the sound you get because you have just two controls - treble and bass. Makes all guitars sound unwell, and sometimes the power switch on my amp fails to turn on at all!

If you can sound good through this amp then you'll sound amazing on anything of better quality!

Its a little black box, but to be fair it is built strongly. Outward construction is good, but sometimes when I have tried to use this amp it does not turn on, and then I have to push the plug cable inside it a bit more to try and fix it.

Its great for people who dont know anything about amps (like me not so long ago), but for everyone else its not going to be popular.

Sounds terrible, but is the cheapskates choice. I advise you to get a Marshall MG10CDR or MG15CDR instead (which I hoped for at the store, but they had none in stock, so I settled for this..).

Squier SP-10
4
This is a solid state practice amp that puts out 10 watts. There are inputs for input and headphone. The amp has knobs for treble and bass. It also has a button to engage gain or drive. A volume knob controls the amp in both the clean and gain settings.

Being a simple practice amp, the general configuration is straightforward and self-explanatory. The controls are responsive for a practice amp and you can easily get a decent sound being a practice amp. This was bought new, but it did not come with a manual.

Because the power is not adequate and the speaker is not that big, it is hard to get a variety of useful tones out of this unit. I didn't even bother putting pedals through this amp, it probably couldn't handle it. (Oh, I did go through my DOD YJM 368 before plugging into this amp, and the feedback/noise was ridiculous!) I used to use the Squire Stratocaster that came with this amp in a package. I also used my current Ibanez rg-120 through it, and they both sounded decent. (Once again, remember that this is a practice amp.) ONce again, because it's only 10 watts with a tiny speaker, the clean sound is only passable. (Hard to say that about a Fender, but it's not fair to expect it out of this unit.) The distortion is actually pretty decent, especially at lower volumes. The only problem with that is you definitely can't jam with this amp, especially with a monster drummer

I used this amp for a couple years before I sold it recently. I really didn't need it anymore. ONce again, because it's a practice amp, you can't complain about the tone coming out of this little guy. The reason I had to sell it is because it just didn't have enough power to keep up at rehearsal. This came in a package with an electric guitar, so I dind't have to try any other models before getting this one. Seeing as it came with the package, I can't complain about the value, especially since it served its purpose. The guitar served its purpose as well, so I can't complain about the choice I made to get this amp.
Did you find this review helpful?yesno
»

HardMetal's review (This content has been automatically translated from French)

Squier SP-10
3
Caution is the one in the case of a low-end Amli trs:

It is clear that for beginners learning to his room c nikel.

We can use easier, there's only 4 knobs.
The level it is easy to get what we can see from the rglage possible.
I had no manual on the amp but hey let's admit that there is no need
Go for simplicity 10/10

So the plot thickens. If you be beginners bin you'll find a lot especially in gain, just to show off with the distortion.

As long as you play on a habitu oyez suprieur amp (like me with my Bandit) ben you will quickly hurt the ears! It's horrible to gain pushed back. If you have power over mics I tell you no, you'd think the speaker is going to explode.

The've always had my c beginners amp. Nikel ds to play and learn trankilou his room without carrying around 25kg. Report qualitprix justification.

Here I recommend it without counsel, while dpend of what you do and your expectations
Did you find this review helpful?yesno
»

Traps's review (This content has been automatically translated from French)

Squier SP-10
3
A transistor-amplifier
-10W Rms
Two-6.35mm Jack, a jack-in, and one headphone output.
-For the settings, there is the volume, bass and treble (no medium). Only an adjustable distortion is not available.

-The configuration is as simple and is fully adjustable from a beginner
A yes-correct sound. we can not talk about good sound.
-No need to book.

It is all a-style (a couple the mutli effects pedal).
-I play it with my vintage Start or my PS2 Jackson.
- The sound is very very blah.
In ca-clear sound goes right through against the distortion is horible.

This amplifier is for beginners and beginners ONLY. If not done as I use it to lay kept portable amp. He returned in any backpack, and it is very light! Attention it needs dune outlet to be lighted.

I use it since I started a guitar that is to say, there is not my time. and since I never had a problem with.
-What I liked at the beginning of this amp c ca ease of adjustment, but even ceuci are quite or very limited. The adopted nessessité of pedal effects are ressetir after some time. Otherwise it is very small and it goes everywhere my friend made him travel.
-This was my first amp so I have not tried before!
-The value for money is okay because I had to lay a pack. In any case it is very reliable as a receiver!
-If it again, I made the same choice!

Finally, it is a nikel amp for beginners, who kept the pouront after their friend for enfaire travel. Otherwise, if you find a bass amplifier and power are not a beginner. rather go kick the fender or Marchall.
Did you find this review helpful?yesno
»
Read the 7 user reviews on the Squier SP-10 »