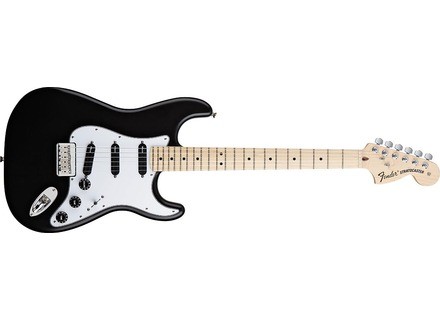 Fender Billy Corgan Stratocaster
4
It's a Fender Stratocaster made in the USA, so no side entourloupe violin is a very good guitar very reliable, thanks to its fixed bridge and mechanical oil bath Fender, the agreement is very good although personally I would have seen a small pink floyd, but hey, it works just fine so what I complain?
The handle is perfect ... it has a C is maple and the key too, and it is not reported when the head, she inherits the design of the 70's. Again, no problem, we can trust the makers of Fender, the frets are well finished and none of them HOOK.
Regarding the pickups, three doubles among Dimarzio, therein lies the originality of this stratum. Two of these pickups are those Mr. Corgan has concocted with Larry when to the other in middle position, it's a chopper.
This stratum has a 5 way switch that splits the pickups in position 2 and 4, a very gradual volume (useful for passing a popping sound at a crunch, or even a clear sound) and two tones, acting on the neck pickup and bridge pickup.

In terms of ownership, I am repeating myself, but I want to point out is gen-nial, pretty does not require any adjustment period and you feel immediately at ease. The cut for our little tin and forearm are welcome, especially for the game sat. Access to the treble is very good, you reach the 22nd box without too many problems.
The sound on the other hand, is not difficult to find, you plug the guitar, and was. Tones, personally, I do not use except when I try to find his Jazzy, this alas, it is not the best, but it is not really made for.

The sounds of this guitar are very varied. They agree to virtually all styles of music (ok, should not be too demanding at this level), with a good amp that follows, it is very easy to type a few small blues rock with the selector position 2, which reminds fairly well the original strata, like the 4-position, but with one side "acoustic-liquid" very very (very) nice clean sound. We can play in styles more oriented "sounds clear" with positions 2 and 4 and all others are ideal to overdrive. bridge pickup, once a disto pressed, sends the full gum, it has a huge nia, a definition and surgical precision specific DiMarzio The Chopper, which I use less, also sound very interesting with sound "dug" and the neck pickup sounds very round and velvety, with an output level louder than the bridge pickup, which comes in handy for a solo passage had to pass over the mix of the group, moreover, it does sound very dense, very rich, which turns almost into a fuzz distortion. Be avoided, however using this microphone for the blues because of its relatively high output level, has less to decline relative to the strings. All microphones are well out the harmonics, which can be as I had my strings: Dean Markley of.
We will however not venture into the grind-thrash-death-metalcore neo-speed, however the sonoritésrestant perfect for heavy metal in the old (I plug in a stack Marshall Valvestate 8100 head - marshall cabinet 1912, yum yum )

I use it for 8 months now, and I think I'll use it again verrrrry long. I tried it with an Ibanez Jem (its too aggressive against AROP cell thereof), a espjesaisplusquoiavecdesemg (too loud), and finally, I hesitated a Gibson SG, which had its equally charming but I preferred the gloss and nia of the Fender has the aggressiveness of the beautiful Gibson.
The highlight of this guitar is really its pickups, which are a first for a stratocaster standard.
The value for money is just huge for a guitar made in the USA by the luthiers of Fender, DiMarzio with three doubles. And it is even more delighted when we learned that the guitar is delivered in a beautiful tweed case finish.
Due to my tastes and market trends of the guitar, I would not be safe to repeat this choice today, but be careful, I do not regret a single penny I have invested, and I Surely, anyway, bought this model at one time or another.

Published on 06/21/08
Fender announces its new Artist Series guitar, a Stratocaster designed to the specifications of the Smashing Pumpkins' frontman and six-stringer, Billy Corgan.