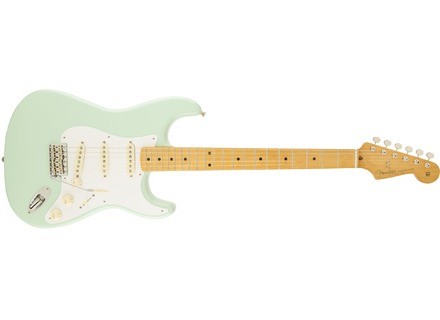 See all 15 classified ads about the Fender Classic '50s Stratocaster »

Fender Classic '50s Stratocaster
5
Did a fair classical training, been playing guitar & bass for 35 years, drums for 30 years, sound-engineering and producing for about 20 years. Musical tates are varied; basically well-written songs will usually work for me. I love electric blues, indie, jazz, the list goes on.

I was looking to replace an old Squier Strat I had (stupidly) sold, around April 2006. Played loads of guitars - as you do - and knew I'd get on fine with this guitar within a minute or two. Bought new in London for 400 GBP.

Straight out-of-the-box It feels like it's 30 years old! The pickups (staggered Alnico magnets) sound brilliant. It has that unique and wonderful 'spanky' signature Strat sound, without having to wait five years playing it in. All the plastic parts - pickup covers, knobs and toggle swith - look nicely yellowed as if aged. The honey-coloured neck seems an old-fashioned shape - Fender call it "soft v-shape" and plays as sweet as anything The retro lacquer is beautiful. The thing that strikes me every time I play the guitar is how it just doesn't feel like a new guitar at all - fantastic.

Colour choice. At the time I got it options were limited to Fiesta Red (mine) or a very surfy light blue colour, but now it's also available in black or a sunburst. But this merely an aesthetic point and therefore hardly a legitimate gripe! Make no mistake: this is a genuine player's instrument.

Build is at least as good as USA-made Fenders, actually I'd say it is better - if some of the new S1's I played are anything to go by. (horrible) From the many many guitars I tried I think the USA-made guitars seem to suffer from patchy quality-control, whereas the Mexican stuff I tried all seems to be consistently top-notch. Personally I don't get the "US-made-snobbery" that seems to be going around. The Mexican instruments rock, period. MInd you, the favourite guitar I own is an early 1990's Japanese Strat which everyone who plays it mysteriously want to buy or steal....

Obviously everyone who has ever played an electric guitar should experience a Strat at some point in life. Whether looking for your first, replacing a loved guitar now past for whatever reason, or simply adding to the collection; try one. Then be prepared to want it, because it's a true Fender Strat for a lot less cash than one with "Made in USA" stamped on the headstock. Or could that just be Fender cashing-in on the snobbery thing? Play it yourself then go figure.

Fender Classic '50s Stratocaster
5
I bought a Mexican build '50s classic at a music store in Newcastle, Australia in 1999 for about $1500 AUS which at the moment is about$800 US. I played the demo one and really dug the pure strat sound it made.

You know that really rich, full sort of 'tubey' strat neck pickup tone, well this Mexican has it in bundles. Lately I've been getting into licks that sound a bit like Beck's work from Young Guns 2, using the out of phase bridge/middle combo' and this sounds really cool as well.

The one significant shortcoming of this guitar is the background pickup noise. This would only bother you in a studio though, because it while it's noticeable, it probably wouldn't bother you on stage.

I checked the display model very throughly in the shop (a daphne blue one) and found some slight flaws on the fretboard lacquer. The one I bought (surf green) has no faults though. Overall, this guitar has a good quality of finish. It holds tune very well; in fact it is more stable than a Strat Ultra I had a few years ago...

Well, I was looking to get back into playing after a 7 year hiatus. Back when I was playing in a weekend covers band I had an '88 Jap' Strat; (lifeless, sterile, thin, these words come to mind), and a '91 Strat Ultra; (very, very playable). I was plugging on to the obligatory Marshall, through a TS-9 Tube Screamer. I was trying to get that rich sort of Eric Johnson tone; (Ah Via Musicom). The Ultra came pretty close too I spose'... These days I'm running this Mexican straight through a '74 Twin Reverb, and when I can I turn it up loud... She's Sweet ...

At the moment my tastes in tone lean towards Hendrix's cleaner stuff, Eric Johnson (still!!) and Robert Cray. This instument has enough tonal flexibility to generate sounds that come very close to these guys (but some of that has to be due to the Twin as well I spose')...

I have started saving for an original vintage, and I'll probably end up with a '60s model, but until then, this guitar more than satisfies my need for that clean, rich classic Stratocacster tone.

It aint' an original, but geez' the difference is minimal.
If you can't afford a vintage right now, try one of these, money really well spent I reckon.

Fender Classic '50s Stratocaster
5
This is a very well-built guitar right here in America that has a great tone great feel and overall great versatility. The Fender Stratocaster is a simple guitar but yet a guitar that has given so much influence for a guitarist and musicians for decades. It has the right perfect balance of tone simplicity and versatility that makes him one of the finest instruments in all of music history. These guitars when they first for introduced had such a great feeling a great tone and worry good addition to the Fender Telecaster at the time. These guitars come with three single coil pickups, a volume control knob, and two tone control knobs and a 5 way pick up selector. There's not a whole lot of extra electronics and switches in different push pull knobs or controls. She's very simple and very basic which gets you pretty much the best tone possible.


These guitar sounds fantastic anyw where you put them in in, such as a clean setting medium setting or higher gain amplifier setting. They have such a great feel and a great tone and are extremely versatile from genre to genre of music. I primarily like the tone of the Fender Stratocaster with a nice high again amplifier such as a Marshall JMP amplifier. They will sound good no matter how you run them or if you have a multiple effects processors or rack units or a giant pedal board going into an amp. These guitars will give you exactly what you give it and the dynamics are fantastic.


These guitars are very easily found in the used classifieds online anywhere such as eBay or other classifieds on guitar forms and even most online retailers or music shops will carry these guitars. Sometimes they vary from neck to neck so I suggest trying out a few to find out which style that you prefer. They also come in arrangement of different pick ups and colors so there is a lot of options to choose from. I highly recommend this guitar to anyone is looking for a great versatile instrument to record or play gigs with.
Did you find this review helpful?yesno
»

Fender Classic '50s Stratocaster
4
One thing that was prominent about the old school Fenders is that they had a bit of a V neck. These V necks can be very much love/hate, so be sure you know what you're in for when buying one. The guitar features an alder body, a maple neck with a maple fretboard (one piece with a skunk stripe), 21 frets, dot inlays, vintage tremolo, three single coil pickups, one volume, two tones and a five way switch.

The guitar is put together decently. It's about on par for what comes out of Fender these days. The frets themselves, while level, could use a bit more of a crowning on them. I found them to be a touch flat. The ends themselves were nice, and they didn't slice your hand every time you moved up and down the neck. The nut was cut properly, although it could probably use some lube -- either nut sauce or graphite. The neck joint on this was nice and tight with only a very small gap that is most likely not hindering any tonal aspects of the guitar.

The pickups in this were a bit too vintage for me. I'm all for vintage gear, but I have trouble playing it sometimes since I'm used to higher gain and higher output pickups. The bridge pickup had a great clean sound, and the in between position was to die for. I plugged this into a nice Fender Bassman, and it was just tone for days. The neck and split positions with the neck were also tonal bliss, but I still found myself wanting some more output for those heavier lead lines. I'm more of a legato player, so these pickups make me work.

The guitar is pretty good, but be sure you like the V neck that's on this. It's a very love or hate type of neck. If you've never played a V neck before, hit up your local Fender dealer and a try a few. Some people really love them, and I think they're pretty cool, but it's not something I want every instrument to have.
Did you find this review helpful?yesno
»
Read the 35 user reviews on the Fender Classic '50s Stratocaster »