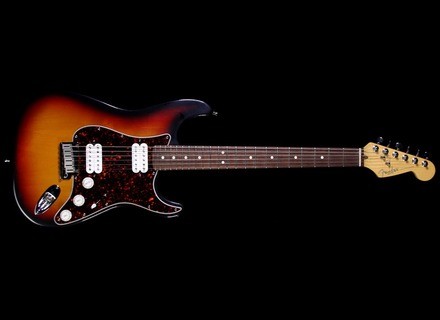 Fender Hot Rodded American Big Apple Stratocaster
5
Bought at a pawn shop for $600.00, Have been looking for a completly stock Big Apple for a long time, Transparent sunset orange, I fell in love.

This Guitar is the most versitale guitar ever made at this quality level. USA made, Seymor Duncans stock (pearly gates plus-bridge, '59-neck), the neck is flawless and as smooth as glass, as all my Strats' are, I play Strats' exclusivly and I wanted a H/H, I actually sold my '65 Les Paul for the money to buy this Strat, as the Gibson was the only H/H I had at the time, good riddins', this Big Apple sounds, feels, and plays so much better. (no more sore ribs from the Gibsons' sharp edges, and I think the strap mark on my shoulder will eventually fade, the gibson was soooooooo heavy).

The construction of this work of art is as flawless as I have ever seen, Body perfect, neck,awesome, and it is as tough as a Strat, and the neck pocket, I mean there is not even a line where the neck fits, as tight as can possibly be. The paint is transparent so you can see the quality of the wood used, Rosewood fretboard grain is strait and true, perfect !!!!!!

This guitar is for all those humbucking guys playing Ibanez, Jackson, Shecter, whatever, there is no comparison to the sound and feel of the Strat, I have used this guitar tuned to dropped B, yes , B, like a Baritone, as well as standard tuning, the hums sound great for any style playing, My band plays Flaw, Mudvayne, Stevie Ray, Hendrix, Blue Oyster Cult, Clapton, 80s' metal (oh yea!!), Skynyrd, you get the picture, the Big Apple can handle all styles (if I could just find about 10 more Big Apples', so I could have one for each tuning, I would), To the point , "Best Guitar Ever".

Fender Hot Rodded American Big Apple Stratocaster
4
The Big Apple strat is basically a dressed up double fat strat with a hard tail bridge. It is a stratocaster with two humbuckers. This model has never been as popular as the traditional strat but it is a model with a devoted following. It started in the 70s when this was a popular mode. Then and now fender looks whats going on in the aftermarket to help decide what models they should make. The specs on this guitar are pretty basic for a strat. It has a alder body with a maple neck. The neck has a 22 fret maple fretboard. The fretboard and headstock have a cool flame finish to them. The neck has a 9 inch radius so it is pretty vintage. These guitars came with awesome Seymour Duncan pickups in them as well with a cool 5 way switch that let you get some split tones.

These guitars play pretty well for a strat. The neck is fairly wide and the shape is sort of a flattened C or maybe a D shape. Differant than any other Fender I have tried but I like it. Reminds me a little of the neck of an SRV Strat. The frets are medium jumbos and the set up is just fine. The hardtail bridge helps tuning stability and tone. I dont know many people who actually use the fender non locking tremolos so having a hardtail on a strat takes care of a lot of your problems.

Not being a huge Fender single coil fan I am naturally drawn to these humbucker equipped Fender guitars. This guitar came from the factory with a great set of Seymour Duncan pickups. It has the Pearly Gates in the bridge of Dickie Betts fame and the unbeatable 59 in the neck that everyone loves. The 5 way switch gives you cool combinations. Starting from the neck position. You get the full neck humbucker. The full 59 gives you a super smooth tone. It is just perfect for bluesy or jazzy leads in the neck position. The next position over you get the outside coil of the neck humbucker split. This gives you your traditional strat neck pickup tones. The middle position gives you your neck and bridge humbuckers combined like on a Les paul setup. The next position gives you the neck and bridge inside coils split so you can get your Telecaster sound. The last position is the full on bridge humbucker. The Pearly Gates is like a hot rodded 59. It has a bit more bite so it is more voiced towards classic rock playing. It has a pretty bright tone overall because it was made to go in Les Pauls and balance out the darker tones. In this strat setup the pickup screams.

Nowadays if you want a double fat strat you have to build your own pretty much. This was the perfect strat for a lot of people like me. People who want a strat with humbuckers and a hard tail. You can find these guitars for sale around the place for about 700 dollars. Because of the strats modular design you can easily make your own version of this guitar starting out with a basic normal Stratocaster. Either way you can get humbucker tone and strat feel in a guitar which is a great combination.
Did you find this review helpful?yesno
»

Fender Hot Rodded American Big Apple Stratocaster
5
Good for over 10 years that I have (this was my first electric !!!), I can still put him notice!

Fender Stratocaster U.S. Big Apple, they are so many U.S.. Limited series produced between 1997 and 2001 I believe.

The handle, screwed as always with Fender soft C is a profile I think, very comfortable (very fine satin varnish), the key has a radius of 10.5 ", it is narrower than a Gibson button. The frets are mediums jumbo. The mechanical fender are normal. Changed since for blocking (spertzel I think) because at the time when I was mumuse with vibrato, it was misery holding chords!!

Electronic level, a master volume, 2 tone (one for mic), a 5-way switching. In short, until now, nothing special, classic Fender no-frills, no mid boost and company!
The interest of the craft is its most unusual config pickups for Fender:
2 humbuckers, Seymour Duncan and please!
A 59 'in neck and a Pearly Gates Plus bridge (expensive microphones to Billy Gibbons, apparently slightly transformed for the occasion on request Fender, hence the "plus"). So good value.

So I put 9 for all this is at the top of the top, I just loved Me a radius of 12 "most flat, mechanical and taking better deal for nags vibrato (although since the mine is glued to the body to gain a bit of sustain, since I'm using it more).

The handle, as stated above, is very comfortable in the hand. You just get used to the Fender style with button and not very wide radius of 10.5 "(not as bad as 9 already!). Fans will appreciate the need to get used Gibsonniens!.

The form, I speak is known among experienced, cutting the stomach is very nice for comfort.
Access to the treble is very good, but it is not a SG instead!

Weight level, I can say that the version ash is heavier than the normal strats, but this is still less than a big Les Paul. In short, it is playable qq hour without sciatica or lumbago for me!

For sounds, see below. The ash provides accurate and slamming one side, nervous in the attacks but well frank without being cold. In short it is reactive. For cons, the sustain is present but limited (I have not said there is no huh, already !!!), attention because it is not mahogany, plus the handle is screwed. Should not hope to sustain LP, SG or PRS, but hey it does on the Fender in general (at least those I've tried). Vibato pasting the body or with a hard tail version, it will be further improved (a little).
I put 8 / 10 (always the same: key rounded and rather thin, even if it is normal for Fender, and sustain without more)