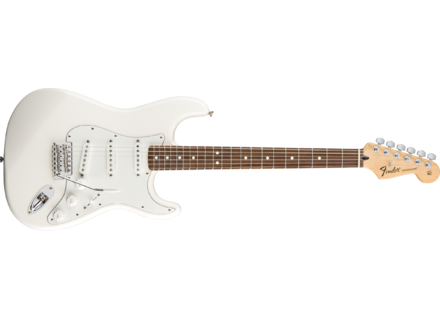 
I bought my AM strat at a place called Falcettis music. Great store. Its a 60 year anniversary additon for what thats worth. I was looking to update an inexpensive squier that I started with. I spec'ed out every available strat on the fender web sight for features and dimensions I wanted. I also wanted and American made strat for obvious reasons. The quality of our products far exceeds that of imports. American troops are fighting to keep us free the least we can do is fight a little back home to keep a few more jobs in this country. (sorry I got on a little patriotic rant there)

The biggest thing for me was a comfortable neck and fret board. Many of the strats out there have small nut width. The AM strat has a 1.687 " width. Big diference in room for the fingers. Also has a satin neck, nice and smooth, not sticky feeling. I chose maple board. Just seems to glide nicer. This guitar as others mentioned holds tuning very well. It has that strat sound I prefer to many others. The factory set up on mine was great for me. Strings not too high ect. This guitar is such a pleasure to play. It was worth the $799 all day long. Came with a great case and lots of extra goodies.

You know I honestly cant think of anything I dont like about this guitar. Other than its hard to put down even after 3 or 4 hours of practice.

Great fit and finish. Attension to detail. Simple and direct style and design. Coming from a machinist that should tell you something.

If your looking to get a good player check this guitar out. If you like it, buy and get playin.......life is short.

i bought this guitar about 2 1/2 years ago at sam ash music for aaround $380. I needed a good guitar for all purposes and this did the trick.

its got a great sound which can be distrubuted 5 ways over its 3 tex mex pickups. this makes for very interchangeble sounds. the guitar can be used for rythm or lead and sounds great both ways. the neck is set very nicely and is solid maple. it has a beautiful finish on it that seams to be very thick yet doesnt weigh down the guitar. It comes in both lefty and righty (im a lefty) and like 5 different colors.

MY only real problem with this instrument is that its vibrato is very easy to move do to the whammy bar attachment. This means that if u change the strings you better not nead to play the guitar for at least 2 hours because it will just keep coming out of tune. it goes from looking like this \ to like this __ and then back again for a long time. other than that this is a great guitar.

Its got a really nice finish and isnt really heavy. i like the feal the neck like i said is really nice with the maple and its very sturdy over all.

The bottom line is that this guitar is versitile, great, and almost as good as and american strat.if ur planning on buying a squier i would strongly urge u to spend an extra 100 and buy this guitar. its infinatly better.

Fender Standard Stratocaster [1990-2005]
3
I got this guitar at Sam Ash and paid about $350 for it. Ive had a BC Rich warlock bronze series, and wanted a good upgrade. I knew Fender made great guitars and wanted some sorta strat but something not too expensive.

I like the look of the guitar and the whammy bar. It has a good feel to it and its built to last. Awesome construction and is very sturdy.

Them dang single coil pickups are god frikin' noisy, except when your using 2 pickups at a time on the selector, then its fine. I replaced the strings with Dean Markleys blue steel strings and they sound so much better than those crapy wires it comes with. And on my warlock, i could play solos and bend the strings way further and faster than on this fretboard. They are both rosewood but the strats feels sticky and slow.Maybe it could also the size frets that causes this prob. It also needs 24 frets! And more sustain.

A good guitar, a little expensive for what you get, still sounds a lot better than the warlock,Has a warm clean tone to it. Its also the last Fender I will own, but its still only a standard. A little disapointed in Fender, i would expected better.

Fender Standard Stratocaster [1990-2005]
4
I purchased my Stratocaster at New York Music in Boardman, Ohio for $329 + tax. It was a good deal considering it was a sunburst finish and those usually go for around $350 and since I'm a poor man with no income I decided to go for something I could afford.

This guitar has great action on the neck, which by the way is smaller than Gibson's neck and would work better for small hands, and it also has some great sound.
This Mexican Made Strat can also take a beating. I've had place people wouldn't even dream of putting something over $20 dollars in, most of the time it wasn't supposed to be there, but nevertheless it was and it came out without a scratch.

I have a few complaints a few cautions as to getting this guitar. First, I would like to say this is a great guitar and all complaints are probably because I don't take the time to diagnose the problem.

(1) The washer around my hookup keeps coming lose, but that can be fixed by getting some washer sealant and tightening it up.

(2) The high E string doesn't come out all that great, I'm guessing it was to do with the amount of space between the pickups and string wich I need to adjust.

For all of you players that like to use alternative tunings, you must keep the tremelo in place to do so. The floating bridge on the Fender just pulls in futher if you tune down your strings. Although it does go into dropped D nicely without the tremelo.

This guitar was very nicely constructed and is realativly thin all the way around, meaning the body and neck are thin, but firm.
It can take a beating and is a very nice work horse on stage and the standard pickups work nicely also.

For anyone looking to first break into the mid-range guitar this is your guitar. Although some aspects of the guitar seem to make it look not as good, don't let it fool you because this is one nice axe. It's a great work horse and player and it's never let me down for 3 years.

This review was originally published on http://www.musicgearreview.com
Did you find this review helpful?yesno
»
Read the 90 user reviews on the Fender Standard Stratocaster [1990-2005] »