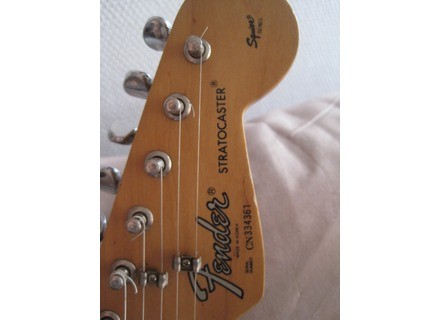 Fender Stratocaster Squier Series
4
I bought this guitar in 92, when I was just a beginner. What a joy to have "my own Fender Strat" for a negligible price. It was a "Squier Series" Fender, made in Japan in the end of 1991.

It survived falling from a motorcycle, so it's really sturdy. I used it for several years before replacing it by a pretty Godin, then I took it out again just to see.
Regarding the way it's built, well it's a Strat. Playing comfort is here. The back of the neck is not so well finished, it's a bit rough. Yet, playing on it is pleasant and it has a great sustain. Its electronics is its main weakness. The original pickups lack personality, there's almost no difference between the three of them: no twang, wood or anything. The tone knobs are of little if any use. As for its bridge, the saddles were not set correctly. Intonation was very hard to set, and the B string is still sometimes a problem. The tremolo's strings were too soft, I had to change them.

I wanted to see what I could do with it, so I made some mods on it. Changed knobs and tone capacitors, which were too weak. I but a Dimarzio Virtual Vintage as a bridge pickup, a Tornade MS L series in the center and a Seymour Duncan Vintage rail at the neck position. This was a revelation. It sounds fabulous. I manage to get great Strat sounds, it doesn't pale to its bigger sisters. It won't get back to the closet!
Last issue to date, the tuners are starting to fail, I've ordered vintage tuners which I'll soon set up.
Overall, a great deal with a lot of memories, and now it'll sound for still quite a while.
Did you find this review helpful?yesno
»