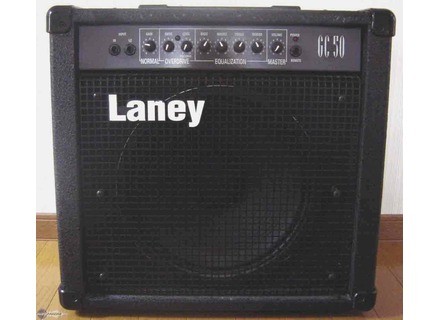 Laney GC50
4
i picked this screamin amp up at a guitar shop where i live. i paid somewhere in the neghborhood of 230 for it i beleive.


ooo it ounds sweet. the overdrive channle on it simply rips.its a loud one no doubt and is very receptive to the volume level of your guitar. the clean channel is soaking and with reverb i even find myself lost in the sound when i slowly methodically move through sales. then you pull the lill over drive nob and crank your guitar up and WHAM your hit with screaming tone and loud tone straight from the guitar gods themselves. the eq on it features both clean and overdrive gain, bass, midd, treble and reverb. theres a seperate clean gain and a master volume. the distortion also features a level nob. it can be intimidating at first but once you got it, you love it.


SCREEEEEEEECH.. hehe.. if you got everything at 10 she squels like a stuck pig. its loud enough at 4 and 5 to play bars and small clubs without being drowned out. and if you play it at 6 or 7 youll find yourself saying "huh what was that?" alot. but whats partial loss of hearing compared to monster tone?


shes a heavy lill sucker. i think its very well constructed but by any means dont drop it. i think that goes for any peice of musical equipment though. she can take what ya give her and beg for more.


over all it is a great amp and will seve you well. ive played it in small bars and ive not had any problems with it. i guess it just depends on your musical stylization though. i myself play alot of blues ie SRV BB King Clapton as well as cassic stuff like hendrix and zeplin., and even some newer stuf like "new" metallica, a prfect circle and sr71. one quick throw of a switch and a turn of a nob and your ready to switch from tone to tone faster than your drummer can get himself another beer.

its one screamin amp. thats the bottom line.

Laney GC50
5
It's an all transistor amp but that is a large manufacturing quality (made in England).
The DLivre power is 50 watts into 4 hms but it is much more powerful than my Line 6 amp 75 watts.
The power of today's amps announced within 8 HMS so you have multiplied the power of this amp by two.
So it is 100 watts according to the standards currently.
THE HP is a 15-inch (rare) that will route all your life.
It has a clear channel between two and a saturation pull of a button.
There is also a rverbe an output line in line out, headphone output, a pedal in between the back and send a return connection for effects loop.
I put 9 because of the fact that there is no book to turn pedal saturation otherwise it's very strong!

Having possder lamps amps (several fender) transistor (marshall) and having a line 6 spider 2. I would say that there is no easier to use than this amp. It plugs and rings! has even sounds great!
Only regret the qualisation is the same for the clean and good satrur puts the amp sounds so good, better than many home fender amp lamps or lamp that chinoiserie creams complete his last time .dropoff window
It must be remembered that amp lamps is very fragile and that the lamps abimen, t very fast so I returned to the quality of transistor. For saturation, there are now so many crankset so important is the basic sound of the amp and its solidity. I put L 10/10

Really clean sound is breathtaking, it sounds warm and prcis deep, it is the ideal amp for blues and rock, pushing the gain a background one can get a lightweight really vintage overdrive reminiscent of the old VOX or fender.
So I have 35 years I am not very demanding level clear sound because I play blues, jazz, rock 70 'and I think this style is the ideal amp. The sound has a lot of momentum and sweetness, plus 15-inch HP never wavers ...

Let saturation, it is not bad at all, largely that of Superior Marshall Valvestate of years 90. As for the current marshall least to put 2000 euros, they are rather shabby. But hey it's a matter of taste ...
I think of all fawn with crankset today the saturated channel has little importance, since we can clner of legendary amps thanks to the mod ization.
Finally I personally use the saturated branch channel with a vox wha to give him his hendrixien I love so much, and was amply, I aprcie is the grain that gives this amp So even the 10/10 this sounds like a transistor amp all-tube amp but you can lug around everywhere (steel grid), Laney it's solid super.
.dropoff Window

I bought this amp used 250 euros commenais because I get tired of my line 6 and its thousands of sounds, I want to return something more simple, an amp that retranscrive the sound of my guitar and working my fingers.
I say this clean, this amp sounds better than an amp lamps up to 10 times more.
Save your money to buy a good crankset and you will keep this stuff all your life!
to conclude: I DO NOT THIS AMP would sell, IF YOU FIND A JUMP ON!
Did you find this review helpful?yesno
»

Laney GC50
3
This is a guitar amplifier transistor 50 W.
An entry-Hi and Lo for connecting the guitar.
A Remote-connection, to engage the overdrive via a pedal.
On the back:
-Effects loop.
-Output for a second baffle.
-Line Out jack.
Front:
-Gain knob.
Part-overdrive with a setting for the density of "Drive" and a "level", noted that to engage the overdrive manually just pull the button level.
Potentiometer-controlled Bass, Middle, Treeble.
Reverb-potentiometer.
Volume-potentiometer.

Very simple to operate, the settings are lambdas as in almost all guitar amps.
The manual was not very explicit.
To get a good sound is a bit complicated, but ultimately it all depends on taste.

This is my first "real" guitar amp, the overdrive provides a broad but limited sound to suit a Rock style, without going to extremes.
For sound in general, as I already said, it's a transistor amp, it's a very square, but no real depth or warmth, style rather "synthetic", whether in the clear or Overdrive.
I used my first guitar Prince P-335 and a SL house and a Epiphone Les Paul Black Beauty ... But this does not increase the sound quality provided.
I do not like the "Clean" lacks all the overdrive can be interesting in some cases.

I have since 1996, I used it often when I started, and then purchase a Marshall's relegated to a corner, then I came out every 2 years, just to laugh, but over time it aged, and had some problems with its "Buzz", and loss of power and volume ... I'm revising a week ago by a boyfriend, he seems to go back on track.
Its weight is not very consistent, and power can play in bars as long as you do not have a drummer too nervous!
Level money, difficult to know the time, but I think I could have found better in the same price range.
Did you find this review helpful?yesno
»

rejemy's review (This content has been automatically translated from French)

Laney GC50
5
It is a small 50w amp transistors with a very simple clean channel, overdrive channel and reverb.

Configuration is very simple. Are not many buttons (8)
gain for the clean
and drive level (pulled to activate the overdrive) for the overdrive
Bass Middle Treble an equalization and reverb and more
volume
Sound and workable intérreéssant quickly obtained by clean, with the distortion must seek a little more but the sound good.
two input HI and LO
remote and front panel
Behind there is a switch, a jack to connect the hp, a headphone jack, a DI / LINE and the effects send and return.

Personally I play metal / punk with this amp and I still have the sound I'm looking for.
you can go from the "round" in his bold and even a clean pleasant to the ear.
I do not think I used all the sound of the amp.
I play in groups and power is ample, I does not exceed half the volume.

I do not use it for long lasting fog fluid but it is versatile
Jai them two other amp before but none had expected versatility and power.
I got it for € 100 when that price was not hesitate.
I think if he would come to market I never repeats the same with more Watts.
Did you find this review helpful?yesno
»