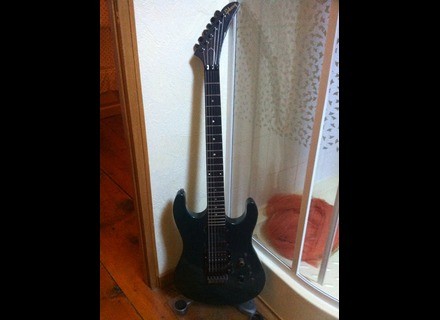 Joe-Rhys's review (This content has been automatically translated from French)

Gibson Mach II
4
the gibson U2 was manufactured from 1987 to 1994.
the gibson Mach II I present today is a Gibson U2 but renamed "Mach II" and was manufactured from 1990 to 1991.
mine wore No. 93310701 series.
late 80's and early 90's there was this wave of guitar heroes that exploded in the face of the world, gibson, aware of what potential customers wanted to seduce producing, too, guitars superstrats.
thus were born the gibson U2, US1, US2 and WRC (wayne richard Charvel).
the gibson mach II had the following characteristics;
-Basswood body chamfered at the stomach and right forearm
like petrucci musicman.
Maple neck, ebony fingerboard with 24 frets perloïd pins.
Grover-mechanical.
Header explore.
Easel floyd rose by schaller made in germany.
-2 Single coil pickups and one humbucker gibson.
Particularly based on 4 electronic switches on / off for each mic and 1 master volume knob (which splits the humbucker) and tone.

the handle is very comfortable and is a compromise between a handle and a les paul strat.
The ebony fingerboard is the most beautiful effect although perfectible when you look closely; you can still see the grooves made by the machines to create the rounded radius.
hooping is just very good, very nice and perfect for ssatrianesques acrobatics; hand fits perfectly and without fatigue ...
Ergonomics has been studied for a perfect placement of the guitar wedged on the belly and forearm for the game with a pick.
access to treble is good and easily plays in this region of the handle.
the sound is just like the time; sounds are accurate for single coil positions and also has good rock sounds way les paul with humbuckers.

this guitar is the perfect symbiosis between the sounds of a telecaster and a les paul but bold, powerful and corpulent latter.
routing microphones requires some research, but once understood, can fully utilize the potential of this guitar that has convinced some players but not all to the chagrin of gibson!
with an ebony fingerboard that gives a hard and accurate sound, adding a stuck handle that promotes sustain, an easel Schaller floyd rose which enhances note length and consistency, and finally a basswood body which has no particular sound character and promotes slightly acute, we get a guitar that does not have a fat sound that has a specific surgical his view; therefore, perfect for shredders of the time and for any short or shredder guitarist looking for a guitar that has not said too to be able to go anywhere by working with his pedals, preamps and amps character.

I bought and sold this year in the wake ...
for guitars I've tried / bought look at my other test benches ...
Do I love most; perloïd pins in the ebony fingerboard, hooping typically gibson and very nice, the stratabound really accurate and dynamic sound, the sound rocks typiquements mediums of easel, holding a copy of the agreement floyd schaller made in germany, sustain.
-I did not like; the lack of bass and corpulence sound, perfected details like working radius key and a big unforgivable blunder at the back of the guitar at the tremolo that could be removed at the factory and they painted over; here gives the impression of a guitar made in a hurry ..
pity she did not have the expected success ...
this guitar will appeal to fans of the stratocaster and hard-rockers looking for a specific sound, surgical and which we can play with the guitar effects which do not denature the sound.
this type of guitar is not at all what I want; I bought it on a whim and I sold it in stride without regrets ....
if she had had a mahogany body like her sister les paul, it was just perfect and I would have kept!
Did you find this review helpful?yesno
»