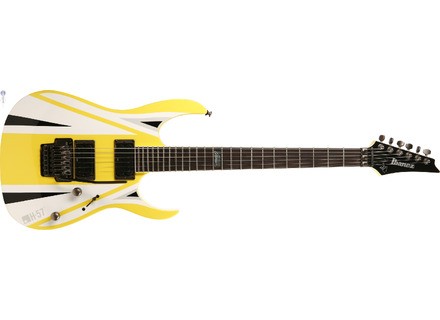 Cesareo RGTH57, STC-Shaped Guitar from Ibanez in the Signature series.

SlapKid's review (This content has been automatically translated from French)" Ben say so! ..."

Ibanez Cesareo RGTH57
5
Signature model similar in construction to Giger model, namely
Channel 5 rooms through and gloss, profile wizard 3 at random but a fleshy hair in the paint.
Volute reinforcement behind the head, in short it has nothing to do with the old rg ...
Rosewood key without pins, class, with white net.
I would say that the body is mahogany, it's weight and sounds pretty medium, in any case it's not basswood is on.
The pickups are the infinity 1et2, alnico, which are warmer and rounder than 3et4 widespread Ibanez.
Often as they excel in split mode, casually many microphones are really lagging in this exercise.
Vibrato is a marvel of precision and aesthetics, everything is flattened-rounded is the megaconfort. Icing on the cake strings normally donned without cutting the balls (we do not like it anyway!).
Against by any system-style lockbar tremlock as the current is classic but indésaccordable floating.
Indonesia-it seems to me, perfect finish and it's 6-7 years that I have.
The color is beautiful, sober and dynamic graphics, a success that never tires (unlike a surf artcore green that made me sick).

It's heavy as guitar, and its vacuum is a hair shy that not breathing as a stratovolcano is on.
Connected it is beautiful it does not stray as a stratovolcano is on.
These infinity alnico are hot but too round for this already very balanced violin, I installed ceramic rocks less class and it's much more fun.
Ozégu access supersonic, but the button is almost flush with the table so it is not too natural for me (like game in more than above in the treble if I speak).
The balance is terrible standing as sitting, nothing interferes with it's top.

We can all play if cable malignant (megaswitch rigor), the violin always follows.
Appreciable sustain more than a typical row, notes die naturally.
I think microphones less pretty but more pungent / thought necessary here.
It sounds good on vox AC15 better on bugera 1990/ampeg gvt50, and downright funky on ... Valvestate 8080! Like what ... the guitar is not the stereo, you can leave theories in the cloakroom.

So the violin filter out the imperfections I guess. 6 standard and 10 after changing pickups, so ... 8

It's been a while! She did not move, no game, no long frets too high / it was so damn well built with quality materials.
Vibrato is just incredible finesse and precision, just a pipe to be paid up: decouple the fulcrum knife if you blunt and it is less accurate after. It applies to all vibrato knife.

So almost a single copy (78 in total, mine more 77 magic number) but I do not know if the figure includes also red finishes.

I dare not confess to the price paid, the seller would need in rapido, but it was costing New roros in 1400 I think. And it's cheap considering what it is.