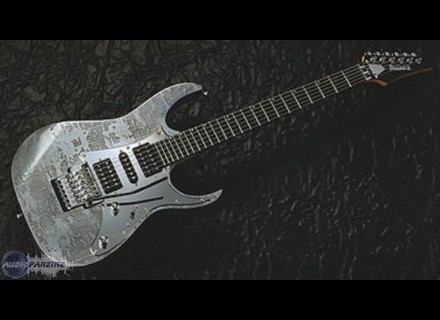 Ibanez JCRG-Metal1
5
The Ibanez J-Custom line almost always has mahogany bodied guitars. For some reason, they decided to use a basswood body with this model. I'm not sure if it had to do with the way the paint was applied or what, but I wasn't exactly the biggest fan of this as it kinda took away what the J-Custom guitars were known for -- mahogany bodies. The guitar has a basswood body with a maple neck, an ebony fretboard with 24 jumbo frets, offset dot inlays, a pickguard, a Lo Pro Edge trem, HSH configuration, one volume, one tone and a five way switch.

This is the same as every other J-Custom in that it's perfect in every way. The finish on this is absolutely sick, and it really stands out. Playing on it feels kinda weird, and it looks like it came out of an alien movie. The fretwork on this is absolutely dead perfect. The frets themselves were perfectly level, and I got some sick action with the thing. On top of that, the ends were balled. That means that it doesn't hurt your hand at all while moving up and down the neck. It's almost as if you're being massaged every time you play it. The neck joint on this makes it super easy to get to the higher frets, too. No need for neck-thru nonsense with this guitar.

The guitar sounds great, but I couldn't help but think it would sound better with a mahogany body. A Tone Zone is installed in the bridge position. If you've ever heard the Paul Gilbert sounds during his Laney days, you've most likely heard this pickup. It's very direct and has tons of bass + mids. However, it can be a bit too hot at times, so it's best to back it off a little bit. That'll help give you some clarity. The Blue Velvet in the middle splits awesome with the neck and bridge to give you those great blues and funk lines. It also delivers some of the sickest clean tones out there. The Air Norton in the neck is one ridiculous pickup as it gives you some really warm and fat lead tones.

The guitar is just as good as any other J-Custom out there. However, I really wish it were made out of mahogany instead of basswood. I can get an extremely similar tone with an RG550 and the same pickup configuration. Basically, the main reason to buy this guitar is for the finish and fretwork more than anything else.
Did you find this review helpful?yesno
»