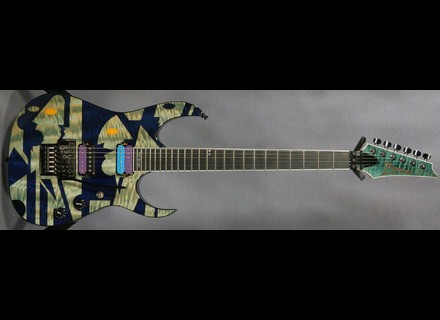 Ibanez JPM90 HAM
4
Ibanez RG Petrucci Signature Series limited released in the 98 90emes anniversary of the founding of Hoshino Gakki Ibanez and Tama
American Basswood body (now rare) and flamed maple table
Maple handle and key 24 frets ebony profile JPM (supposedly profile Petrucci)
Floyd Lo Pro Edge, Mechanical Gotoh
Micro DiMarzio Air norton in the neck and Steve's Special in bridge
1 volume, 1 tone, 1 3-position selector
Compared to the basic JPM on keys ebony instead of rosewood, it has a flamed maple table while the base model has not, the color of which is not the same with microphones color and markings on the keys are different

it sounds modern ... perfect for the Rock Prog Metal trend, it sounds right, does not seek to blues or old school plans rock like Hendrix, Led Zep, Kravitz is not directory, the crunch out super bad nothing to do with Les Paul, for such is not clean on a Telecaster or Strat funky shots we forget right now ...
This guitar is built for Metal Surgical registe everything fits perfectly against him if I compare it to an ESP KH lacks precision that not enough slap ... limit a little soft
After must love his register, this guitar is for me that when I feel like getting a bit of Dream Theater, Vai, Satriani, it is debatable but it is the perfect weapon after this skyscraper must choose amp I tested a lot and one that suits him well as luck is the Mesa Mark on Rectifier I have not ever liked it sounds FM rock on a Fender, Marshall, Vox brief you the have understood it sounds super lame, similar to the effects must choose

Guitar I bought ocassion 10000fr at the time in perfect condition at a friend who used it more, the deal was that I had to make him feel like if he returned it again. .. she dragged home a lot over the years and since she's gone ... bah I miss her ... although I has the Les Paul, Strat, Tele, ES, SG ... short of the guitars to sound deeper and vintage, it's still a super nice guitar playing and looking after must love the signature model but this one stood out with its colorimetric and plugged into a Mesa Mark V is a killer, I also had an Axis Musicaman which is also great but still different
After there is also the affect I had a very big period Awake or I studied the entire album in the lower corner and after that Dream has not done anything so grand they will say ... and this guitar is part of the generation or Petrucci was at the top and this guitar birthday represented well the top of Ibanez and the artist, so I did more than has sought in a ...

st.warin's review (This content has been automatically translated from French)

Ibanez JPM90 HAM
5
- In what country does she makes? (United States, Japan, Mexico, France ...)
Does it makes in Japan in 1998 fter 90 years of the brand. There are only 450 worldwide. MODEL is an exception and collection!
- How many frets, what kind of micro as well as their configuration?
The neck has 24 frets on a button in bne. The body is basswood with a table in Saddle flame of beauty!
Neck pickup: air norton, bridge Micro: steve special
- What type of bridge (Floyd, Wilkinson ...)?
Low pro edge tremolo
- What are the rglages (Volume, Tone slecteur micro ...)?
There is a volume, one tone and a toggle switch 3 position type Les Paul.
- What type of race?
The handle is round and flat in Saddle a pice with a twist in what is bne trs rare Ibanez. This handle can play everything: sweeping, tapping, and many go sr return fire.
In short, a great scratching trs versatile and modern sounding. The microphone is serious and trs trs prcis hot. The microphone does not bleed sharp at all and the position is a intermdiaire rgal for clean sounds. Just listen to Liquid Tension Experiment 2 to hear it. It sounds of thunder!

The neck is super enjoyable and the SETTING THE scratches are super simple. It is trs prcise and sounds right away. It is not too heavy, thank you to the basswood body.

It should rev quite the modern game (jazz rock, shred, prog sr well ...) It is not great for the blues ... Logic is not what petrucci plays.

The top prize is rappoet qulit scratching as this is legendary and will remain so!
Did you find this review helpful?yesno
»

Ythad_Viny's review (This content has been automatically translated from French)

The comfort of the handle, the accessibility in the treble is very good. Do not hide this guitar is a highway for the fingers!

I personally use the microphone for severe acute because it is a roundness and a very dynamic equilibrium.
The micro acute it is, of sr, use with the distortion. Branchel in Mesa, and Paradise is the guitarist.
I also use it with my Marshall JCM900 and revisit it s'avre of precision in all circumstances. The sounds are very clearly be defined, it's happiness

It's been ten years since I practice. This is one I use most in the studio and taken home for exos (what is ramshackle fingers!)

No regrets on this purchase, however.
In addition we are pleased that 450 on this earth, then.
Did you find this review helpful?yesno
»