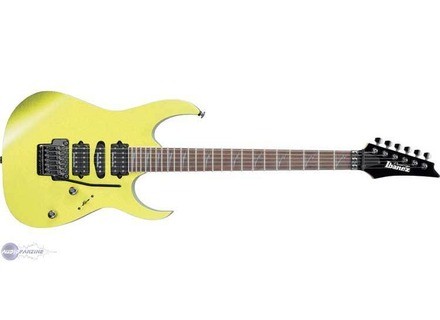 RG2570E, STC-Shaped Guitar from Ibanez in the RG Prestige series.

Ibanez RG2570E
5
This is a classy looking shredder guitar. Ibanez puts out some great quality low budget guitars for the consumer.The neck on these guitars are very thin and Smitty's. They're not finished and then you can feel the bare wood across your skin. They generally come in two humbucker settings with his volume control knobs and tone control knobs with the pickup selector. There's not a lot of bells and whistles and these guitars and your pretty strip down rock 'n roll guitars.

This guitar will sound great pretty much any setting of amplifier that you have. So if you had a good high gain amplifier such as a Mesa boogie or Bogner amplifier in your to get some great tones on his guitar. The guitar itself isn't a guitar that's full of tone or soul but it's a good guitar for someone wanting to learn how to play the guitar and needs an instrument that's very budget friendly. So you're not going to walk away playing this guitar feeling like there's a bunch of tone within the wood or the feeling you're going when playing a nice hot-rodded Fender Strat It's a good price for this guitar and is a very extremely fun guitar and it's actually pretty nice guitar to look at well.

Ibanez has shelled out a lot of guitars in their day and this one is a great one. For the money it doesn't get much better than these guitars. You can find them in the used section of classifieds all day long. I recommend this guitar to anyone who need a good simple guitar or something that is meant to be shredded on. These are fun guitars and very comfortable to play.
Did you find this review helpful?yesno
»

Ibanez RG2570E
4
The RG1570 is back...kinda. This is really the same as a 1570, but it has some different inlays. Aside from that, it's really the same exact model. The guitar features a basswood body, a maple neck with a rosewood fretboard, 24 extra jumbo frets, sharkfin inlays, an Ibanez floyd rose, HSH configuration, one volume, one tone and a five way switch.

The guitar had a nice weight to it. It wasn't too heavy, and for someone who has a bad back like myself, that was a great thing. I hate heavy guitars, and I find that they tend to hinder tone as well. The fretwork on this was solid, and I didn't notice any major issues. There was some wear on them as this was a used guitar, but it was nothing major. It was very light wear. The bridge on this is the Edge Pro, and it's a solid bridge. Some people like to hate on it because the previous Edges were amazing, but it's still a very solid and great bridge. The biggest issue is that it's a bit stiff.

The guitar had some aftermarket pickups installed in it. It had the DiMarzio PAF Pro in the neck, Blue Velvet in the middle and Steve's Special in the bridge. The Steve's Special works awesome for these guitars. Basswood tends to be pretty midrange heavy, and the scooped SS works awesome for delivering some super clear and tight tones. It's like a match made in heaven. The Blue Velvet worked great for split tones, although I'm not a huge fan of it on its own. The PAF Pro is very cool for that new school PAF sound, but it can be a bit sterile and bitey at times. I tend to prefer pickups a bit warmer than this in the neck.

The guitar is great, and if you replace the pickups with something from the DiMarzio line up (which I find works best with basswood guitars), you'll have one hell of a player on your hands. The guitars are great buys on eBay and other places like that used. You can get a really good deal if you look around because they're so plentiful.
Did you find this review helpful?yesno
»

harx's review (This content has been automatically translated from French)

Ibanez RG2570E
5
A guitar with a very rich sound. A beautiful violin. A very thin neck (very practical, high quality). And she is light!

In short: Exelente for solos, but avoided altogether for those who do that riff.

Rich, shiny, pretty versatile with good control and the amp that goes with it. I have not changed the pickups as my rg 370B, but if I had the means I would and I'm sure I will have a huge sound. But I do not want either to give me the means since the sound and already very rich ^^.

Vibrato "lo pro edge" tends to leave a resonance in certain rhythmic muted. The fact that there have strings blocks (necessary with the vibrato, which also few really be triturated in all directions with little tune (or not at all. If yes! Yes!)) Makes the difficult tuning that few really hinder live (luckily we just set directly on the vibrato of some chouilla). Again the "riffeur" will be annoyed if the guitar is out of tune too. For soloists, a bend enough to disguise the problem or ^^ then have to play fast enough to not distinguish notes: p, waiting for the intermission to loosen the ropes and blocks re-tuning.
Me his suits me, since I am a soloist and I play with this guitar for 2 years (I learned to play very fast ^^ of it).

My game style has evolved ... I do not know if I would take the same guitar. but just for the sounds I get with vibrato and richness, I keep for solos
Did you find this review helpful?yesno
»

collado's review (This content has been automatically translated from French)

As already said the handle is an auto road with access to acute exceptionnel.Bien balance is very enjoyable on stage

You can almost do anything with (you will not be tapping blues with his pure, is not messing around) but is on the rock, metal, shred etc. ......... It's perfect! It effective in the registry show softer (pop. .......)

An instrument of relatively reliable and versatile quality price report serves me very interressant.Je variation on recovery as a repeating group metal.Rien
Did you find this review helpful?yesno
»
Read the 8 user reviews on the Ibanez RG2570E »