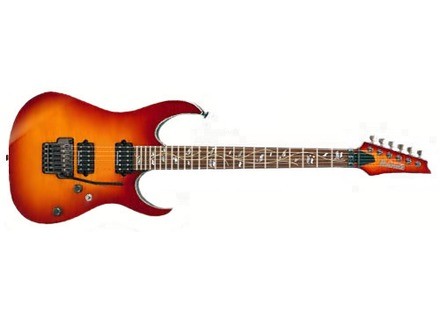 Ibanez RG2820CT Prestige
4
Ibanez is really known their great sounding tube screamer overdrive/distortion pedals. They're also quite well known for their inexpensive and budget friendly guitars. While most of their guitars range from around $200-$600 they do feature in nice line of prestige model instruments. They are a little bit better built better quality wood and a overall a better balance and feel.


The tone of the prestige Ibanez guitars are very good. They have a nice warm balance tone that feels very good when you get it in front of a high gain amplifier such as a Bogner, Marshall, or Mesa boogie amplifier. These guitars have a great warmth and really blends well with many styles of music. However, most of the Ibanez guitar users veer towards the hard rock to metal side of music. So this guitar is not good to get you a very good clean sound that you would find for my Fender telecaster or a fender Stratocaster but it's going to give you a great feel and a great sound for pretty much any style of music but primarily for the hard rock and metal users.


These guitars you can find new for right around $1200 or so. It's not a bad price for a good quality instrument if you're in the market for a nice shredding guitar. The nice mahogany body wood with the maple top is quite gorgeous. I recommend this guitar for anyone who wants a nice fast neck that is very easy to play. The necks are great and the comfort is where this guitar really shines.

Ibanez RG2820CT Prestige
5
This is a guitar that was released for 2003 only as a limited edition model. It has a few cool features that most of the regular line up doesn't have that helps make it stand out from the crowd. In fact, this is very close to some of the coveted J-Custom models out there. The guitar features a mahogany body with a flame maple top, a maple neck with a rosewood fretboard, 24 extra jumbo frets with a vine inlay, an Edge Pro bridge, two humbuckers, one volume, one tone and a five way switch.

The first thing you notice about this guitar is that the flame on this is pretty good. It's not quite as nice as some of the J-Customs out there, but it's still very solid. The guitar had a nice weight to it despite being mahogany, and it's very comfortable when it comes to holding the guitar. The fretwork on this was superb. They were crowned just perfectly, and the height on these were perfect. I was able to get some sick, low action with this without any problems at all. This model has the Edge Pro, and while some people were disappointed with it, it's actually a very solid trem. While it doesn't have the locking studs that the others had, you can easily add them for about 40 bucks. It's a little stiffer than the others, but it's still cool.

The guitar had some real DiMarzio pickups installed in it. The bridge pickup was a DiMarzio Tone Zone and the neck was an Air Norton. The bridge pickup has lots of mids and bass. It's great when it comes to those shred lines as it doesn't get thin. Rhythm can be real cool as well for that almost cocked wah kind of sound. I found that lowering the pickup a bit helped it terms of overall clarity. The Air Norton happens to be one of my favorite neck pickups ever made by a pickup company. It's super smooth and fat. If you've ever heard any of John Petrucci's lead lines, you've heard this pickup. It can sometimes be a touch too fat, but it's easily fixed with the bass knob on the amplifier.

These are very high quality guitars, but they can be a bit hard to find because they weren't exactly regular production items. The fretwork is great, the bridge is solid and the tone is right up there with all the rest of them. The one thing you might want to do is swap the pickups as the stock ones aren't that great. Other than that, you should enjoy this guitar.
Did you find this review helpful?yesno
»

Ibanez RG2820CT Prestige
5
Ibanez decided to release a special guitar around 2003. It was pretty much the same as the J-Custom, but it came from the Prestige factory instead. Aside from the fact that the fret ends aren't quite as round as what you find from the J-Custom shop, it's still one awesome guitar. It features a a mahogany body with a quilted maple top, a maple neck with a rosewood fretboard, the special vine inlay, an Edge Pro Ibanez bridge, all access neck joint, two humbuckers, one volume, one tone and a five way switch.

The guitar was pretty much flawless. The quilt on this was deep enough to where it stood out nicely, and the finish on this helped give it some really cool 3D effect to it. The bridge in this is an Ibanez Edge Pro, and they're very solid bridges. While they're not quite as nice feeling as the old school Edge or LoPro, they're still high quality bridges. Do the locking stud mod, and you'll be good to go. The fretwork on this was top notch, and I was able to get some super low action without any issues at all. The vine inlay was also done perfectly, and there wasn't any filler in it like you sometimes see.

The guitar had a Breed set installed in it, and it was an awesome combination. The Breed Bridge is like a very hot and middy PAF Pro. It's super hot rodded, and it can really push an amp for that powerful, humbucker sound. However, it also responds quite nice to the volume knob. When you roll it down, you can get a nice, cleaner character that works great for single channel amps. It has lots of dynamics and harmonics once you crank it up. The Breed Neck is one of my favorite neck pickups that DiMarzio makes. It's super fat sounding, and but it's not so fat that it sounds dull. There's just enough treble in here to help it cut through and remain like a normal neck pickup should.

If you can find one of these guitars, I highly recommend picking it up. They're top notch guitars and even resemble the famous J-Custom guitars. While the fretwork isn't quite as amazing as the J-Custom, it still has awesome fretwork, and anybody should be happy with this. I recommend replacing the pickups if you have a stock one, though.
Did you find this review helpful?yesno
»

jani_laiho's review (This content has been automatically translated from French)

Ibanez RG2820CT Prestige
5
Japanese-made guitar. 24 jumbo frets, two humbuckers Dimarzio mods by Ibanez. .
The floyd is the Ibanez Edge Pro, THE REFERENCE of movable bridges. 1 volume, 1 Tone knob a three positions.
The body is mahogany, the neck into the saddle and rosewood fingerboard. Note the prsence of the tree of life pearl finish J-Custom (not the same as Vai, he worked the more and more eye-loeil, which did nothing here pjoratif) absolutely beautiful on the handle.
Mcaniques Gotoh.

Binding beautiful white, table Saddle lgrement flame. Nothing wrong level finish, Ibanez has the package for this edition limit of 2003 to the markets euopen, has 500. Of course, it is now found to have a least a chance to find OCCAZ on forums (like me)

I put 9: my knob moves a little, I have to tighten regulirement, and the jack is not absolutely parallle the body. It's nitpicking, it is agreed ..

Channel gnialissme with a satin finish that changes lives. It gives me the best points I've never seen it elsewhere. Contrary to what the n is often said, the rhythms are not tired of this type of handle. CHAC is very simple to acute thanks to the heel profile ibanez makes the handle semi-crossing. The guitar is quite heavy (mahogany), but the sustain is affected. As mentioned above, the guitar goes to the essentials: two microphones, three positions. It is easily reached what we want.

I have nothing wrong, yet I am demanding. I put 10.

My dominates prdilection t has long mtal, with groups like Children of Bodom. The guitar is doing well, but it would be even better with microphones appopris (SH13 an example, with mahogany and it would certainly sound overkill). But the result is always a satisfactory (to say, I used to be a Jackson RR3, guitar hardos, who held much less the road distos heavy).
She directs distos is indniable. But what makes his particularity is the warmth of the sound. It's violent, but it's hot, even in the bridge. And it's huge. The pickups handle is a warm wish, perfect for a lil lil Malmsteen or For the Love of God.
In positiotn intermdiaire, the sounds are crystal clear and well Defines. Perfect for a arpgess the Scorpion.
My RG2820, live in a POD, and I have my sound. Sound.

PS: I play lots of blues, and with the right settings, no problem.

Obviously ells no clear sound of a Stratocaster, do not RVer. But the sound spectrum even when dispoible is impressive.

I use it for about a year. I love his Aesthetics, refined and chic. This is my Ibanez Premire. When I saw the look, I cracked. I booked the guitar without having to touch (selling private internet). I've had before Jacksons, less high-end course, but even in these distos tenaint not compare. The quality price ratio today can not top stepfather, but hey, the rating swells due to scarcity. For me, it is worth its price.

I would do without an ounce of hsitation.
Did you find this review helpful?yesno
»
Read the 5 user reviews on the Ibanez RG2820CT Prestige »