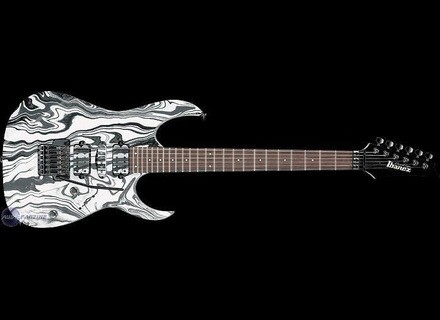 RG20051, STC-Shaped Guitar from Ibanez in the Limited Edition series.

Ibanez RG20051
4
These are super rare guitars that you really don't see often at all. I happened to come across one in the store one day, and I fell in love with it. The guitar isn't that special except for the paint job, but it just oozed tone for whatever reason. The guitar has a basswood body with a maple neck, rosewood fretboard with 24 frets, dot inlays, an Ibanez Edge Pro tremolo, HSH configuration, all access neck joint, one volume, one tone and a five way switch.

The main reason people buy this guitar is for the swirl, and let me tell you, it looks great. The swirl on this was super cool, and I wish Ibanez would release more of these. Usually, you only see swirls on super rare Ibanez guitars (like this) and from guys doing it out of their garage. The fretwork on this was top notch, so no issues there. The ends didn't slice up my hands, and they were nice and level. I got some nie action with the model. The only real issues I did experience were some fretwear and scuffs in the back of the guitar from a belt buckle or something.

The guitar had some DiMarzio Breeds with an HS3 in the middle. The Breed Bridge is absolutely awesome for these RGs. It gives the guitar some balls that it desperately needed. It's especially wonderful for lead tones thanks to the huge amounts of mids. The HS3 is pretty bland and super low output. I was never a huge fan of the HS3, but some people love it. The Breed Neck is probably one of the best lead pickups out there in the world. It has the thickness and smoothness of the Air Norton, but it also has the openess and some extra clarity like the PAF Pro has.

These guitars are super rare, so I doubt most people will be able to find them, let alone buy them. I got super lucky as I found one of these that was traded in for another guitar. It's a very cool guitar, but I honestly don't feel they're worth the price simply due to the fact that they're no different compared the RG570, RG1570, etc. You could just get one of those and swirl it for less than half the price of this.
Did you find this review helpful?yesno
»