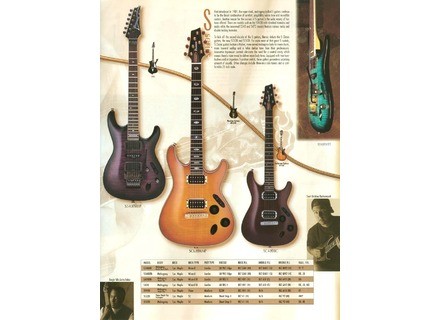 Ibanez SC620
4
This is the high end model of the PRS killer that Ibanez tried to make around this time. It's very similar to the other models, but it has a fancy top and some gold hardware. I find that it reminds me quite a bit of the old school Caparison Angelus that was released a year or so earlier. It has a mahogany body with a maple bolt-on neck and a rosewood fretboard, 22 frets, unique inlays, a hard tail bridge, two humbuckers, one volume, one tone and a five way switch.

This model had a very nice flame maple top on it. It was bookmatched nicely, and it really popped out considering how little this guitar was going for in the shop. The neck itself felt very nice, and the guitar was quite light. The gold hardware had some light pitting on it, but that happens with all gold hardware. The frets on this were great, and they had very little wear. The ends were also nice and rounded, so there were no problems with the thing scraping up your left hand every time you moved up and down the neck. Getting up to the high frets was also easy as it had an all access neck joint.

This guitar had some aftermarket pickups that were installed in it. It had a DiMarzio Breed set installed. The Breed set is usually used in the RG series with basswood bodies, but it can sometimes work with mahogany bodies. The Breed Bridge is great for that fat, overdriven PAF sound with a bit of that signature DiMarzio linearity to it. It gets some really cool harmonics, and it can deliver a really smooth overdriven tone if you back off the tone knob. The Breed Neck is great. It's like a mix between an Air Norton and a PAF Pro. You get a fat humbucker sound in the neck, but it's not so dark that it's muddy. The best part was that the five way switch allowed for all kinds of different tones from funky to full blown metal.

They look great, and they tend to play pretty nice as well. They go for more money than the normal SC line, but I find that they sound a bit better, too. They're also a bit more consistent. The guitar benefits from a pickup swap, so keep that in the budget while purchasing one of these.
Did you find this review helpful?yesno
»

al_ex78's review (This content has been automatically translated from French)

The neck is thin and trs trs enjoyable for people who do not have big hands trs. The natural finish of the handle is trs caring and beautiful mother of pearl inlays.
Access in acute is perfect, nothing wrong.
The body is also thin and lightweight for a perfect fit of the guitar and play little tired feet.
The first sound is fantastic with a fade to sustain rputs Gibson ...
I changed the pickups for a Dimarzio Paf Pro and Fred (Mr Satriani utiliss by itself) and we pass a guitar a guitar gniale poustouflante!

Being a fan of Satriani has always been, and can not purchase the Signature MODEL I MODEL opt for there are now ten years and I do not ENTSO my purchase. APRs have changed the pickups for those of you end up with Satriani guitar MODEL approaching the signature with pluses and minuses my opinion:
- The most: the body of the SC620 is RALIS mahogany wood is a much more noble than the lime used for model signature.
- The least: no vibrato which limits certain phrass.
I played on a Marshall Valvestate 40W x 2 plus pdalier a GT3.

I bought this guitar in 1996 if I remember correctly and it still keeps looking new APRS have played extensively during the first five years and having to lug around concert rp te.
I chose to Ibanez's reputable and I'm not. I have other guitars to play brand diffrent other styles but I Reserved it for solos and frenzied Summer Song With me Always, always ... .

Hallyd's review (This content has been automatically translated from French)

Channel super nice, access to acute meiveilleux the ergononomie extra super light and very well balanced a real treat, with the sound micro V1 and V2 is that it sounds ok I managed to have with this guitar sounds Gary Moore, Santana, Satriani ... that's happy, but I've been equipped with Dimarzio Fred and PAF Pro and there is the paradis.Je love it more and she is very beautiful.

I do not have specific styles Zic can do everything but Rock, Blues, Hard ... I have a Marshall TSL 100 JCM 2000, a Tonelab LE, an Ibanez TS808, a Dunlop 535Q and an octave Fulltone Ulimate and every time I take my very dear and Ibanez I branch it is the dream find myself every time

For over 8 years that I have and I love everything about this guitar, I have a Gibson SG Special and an Ibanez 550 LTD Japan and it is by far my favorite and is great value for money and I would do this choice the eyes closed without any doubts.
Did you find this review helpful?yesno
»