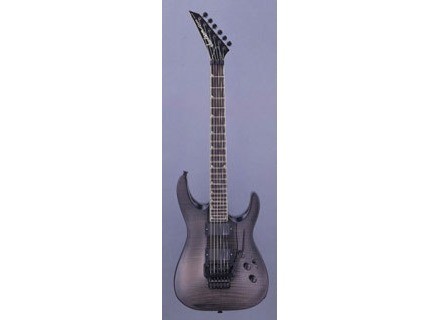 Jackson Stars ADK-01
4
The AKD-01 is basically an "Active Pickup" version of the DK01. It's main thing is that it has the EMG passive pickups, but it also has the Afterburner that you can engage or disengage. The guitar has the following specs:

The guitar is decent, but it had a few flaws. The one thing that jumped out at me was the neck joint gap that I noticed. It was pretty big for what Jackson normally allows on these guitars. I couldn't really notice much of a difference in tone, but I always wondered how much better it would have sounded with a tighter neck joint. On top of that, it could cause issues with string alignment down the road as the guitar gets taken apart for servicing and whatnot. Frets were decent and about on par with what you normally see from these guitars. The bridge is a pretty cheap floyd, so don't expect it to be as stable as a normal one.

The guitar has EMG H3 pickups installed in it. These are actually passive EMGs, and I don't think they're that great. They lack the clarity that the normal EMGs have, and they seem to lack the balls as well. The best H series pickups are the H4s, but even those lack what a real EMG has. That said, it also has an EMG Afterburner which you can engage to really kick up the gain. Be careful, though. For one, it's noisy. For two, it's a huge boost. If you're boosting your amp already, you'll probably just get a big mess of gain and buzz. Higher gain amps don't really benefit from this, I've found.

The guitar is decent, but you need to look over it before committing to buy. The flame top on this is just a veneer, and it's a bit disappointing to see Jackson use basswood when their normal guitars are either alder or mahogany. With a pickup swap, it could be a pretty cool guitar, but it would need a setup.
Did you find this review helpful?yesno
»