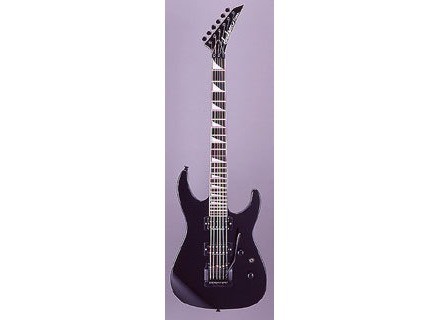 Jackson Stars SL-j2k
4
This is another version of the Kahler equipped guitar. To be honest, this is not really any different from the SL1 that the Jackson Japan division was offering as it has the same pickup configuration and nearly same everything else. The guitar has the following features:

This guitar has probably one of the most hated devices I've ever had the displease of using -- the Kahler floyd. Besides the fact that this is some huge device that permanently alters the guitar, it just feels bad. The way the bridge moves with the strings just feels wrong to me. Maybe I'm too used to the way that normal Floyds work. I'm not sure, but I just wasn't digging this. The fretwork was pretty good on this. I didn't notice any blatant issues, and I was able to get some good action on this without too much of an issue (no thanks to the ridiculous Kahler that's on this). The binding was nice, and everything else was top notch.

The guitar was a bit brighter than most other guitars for whatever reason. Maybe it had to do with the Kahler or just the natural sound of this particular piece of wood(s). The Custom in the bridge is usually very thick, and it has a nice top end that works great for these neck-thru designs. However, the treble on this was a bit too searing for my liking. It did the 80s thing without an issue, but it seemed to have issues getting a thicker tone without having to reach for the tone knob. The 59 in the neck was much the same way in that it started to sound a bit plinky or something. It's hard to describe if you've never heard it before.

Take the Kahler off this, and it would be a solid guitar. Leave the Kahler on, and it's a guitar that I really don't want anything to do with. That's how I feel about the Kahlers that are on these bridges. Kahler does make one good trem, but it was discontinued and pretty much only used on Anderson guitars. Anyway, if you're a fan of Kahlers, try out this guitar as it's still a solid guitar.
Did you find this review helpful?yesno
»