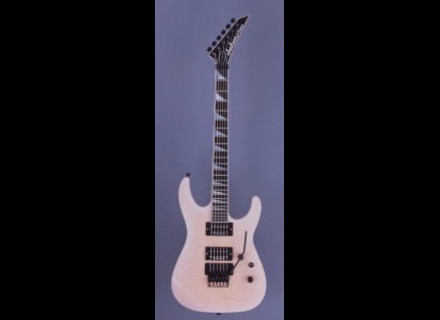 Jackson Stars SL-j1
4
This is pretty much the same as any American Soloist out there. The quality is roughly on par, and it has nearly the same features. One thing that should be noted is that I believe the flame maple top on this isn't quite as thick as the American ones, but you'll have to confirm that as I'm not entirely sure. The guitar features the following specs:

This isn't the exact same as the SL1, and I should point that out now. It's built in the Japanese facilities, so it's built more towards the Japanese specs. I noticed that these guitars tend to be a bit lighter than normal Soloists go, so take that for what it's worth. The fretwork is very good on these, especially considering what you're getting for the price. The binding was also done nicely. The top on this stood out, but I think it's thinner than the normal flame that you see on Jacksons. I especially like how this guitar has an original Floyd Rose bridge instead of the Schaller one.

The guitar was roughly perfect, tonal wise. However, there were a few issues that I was having. The guitar has Seymour Duncans installed in it, and it had the JB in the bridge. I like the JB in the bridge with all mahogany guitars, but it can sometimes sound a bit too bright and piercing in the neck-thru maple designs. The 59 in the neck is great for those clean tones and lead lines, but it wasn't quite as versatile as I'd like. I normally install a custom 3 way switch in my guitars that allows me to split the inner coils of two humbuckers. This gives me an amazing clean sound, and if you've ever heard Petrucci's clean sound, you'll know what I'm referring to.

The guitar is very good, and they're great alternatives to the normal Soloists out there. The problem is finding them because they were never officially offered here in the US. They were meant solely for the export market, and I think they were kept in Japan, although they might have been distributed in Europe. Jump on one if you find a good deal on one.
Did you find this review helpful?yesno
»