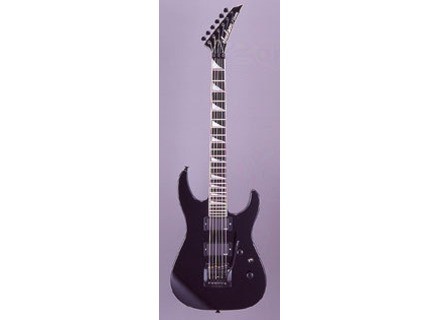 Jackson Stars SL-j1ek
4
If you're one of those people who just has to have a Kahler for your guitars, this is the guitar you want to look at. While it says it's an SL1, it's actually an HH configured guitar, although those numbers really never meant anything in the first place, especially once you start customizing everything. The guitar features the following specs:

I might as well start off with the major part that bugs me about this guitar. I just cannot get along with these Kahler bridges. While I understand their attempt at trying to improve upon the Floyd Rose design, the way they did it just doesn't work. It feel super spongy and just bizarre. I also dislike how it responds when I'm doing my normal fluttering and whatnot. The rest of the guitar was very good. You had some good fretwork (although there were some grooves in there due to this being a used guitar), good overall assembly and attention to detail.

The guitar had a Custom in the bridge and a 59 in the neck. The Custom in the bridge is great for that thicker rhythm tone. In fact, it's my favorite pickup because it's thicker than the normal JB, but it also has some top end to it that helps cut through the mix. It's kinda like the best of both worlds. On top of that, it's as versatile as the JB. The 59 in the neck is great for lead lines, and it works quite nice for cleans. You can get a very fat tone, especially if you roll down the tone knob a bit. That's when this pickup really starts to shine, in my opinion. No real need to replace the pickups in this guitar.

These are good guitars, but the Kahler on this totally kills everything about it for me. It's just not a design I like, and no matter how many times I try it, I can't get along with it. That aside, the rest of the guitar is top notch. If you're looking for the regular floyd rose or even a hard tail version of this, jackson's Japan division makes them. They're all very good and high quality guitars.
Did you find this review helpful?yesno
»