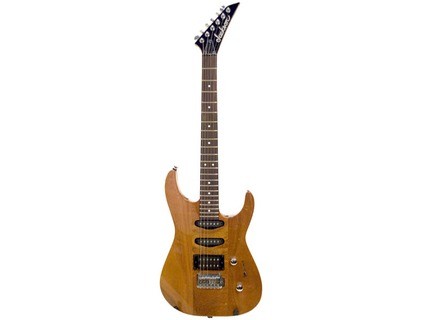 JS20 Dinky, STC-Shaped Guitar from Jackson in the JS series.

Jackson JS20 Dinky
4
I bought this used at Guitar Center for about $150.

This guitar was great, the action was a lot lower compared to many of the Mexican Strats that other friends had. After a little bit of tweaking, I was able to get a faster feel than even my sister's Ibanez S470DXQM.

Also, if you are into the looks, then the black polish is great, despite its habit to show fingerprints, etc.

The bridge obviously is cheap, and don't even think of using a whammy bar on this one.

Ever since the action is low, I suggest medium gauge strings, in order to remove the fret buzz, which annoyed me beyond believe.

The guitar is probably a decent guitar for the price. You get what you pay for.

The finish was impressive, and if you take care of it with a bit of polish, it will always be beautiful to show off.

I would definitely recommend it as an entry to mid level guitar. My only complains would be the fret buzz, thus not allowing you to play with light strings.

THis guitar is awsome weither your playing blues, punk rock, heavy metal, this guitar sounds great when played any style of music. It also has the best colour in the world RED.

Well, there isnt very much anything i dont like about this guitar exept if your playing with extra light stings they will tend to snap more than often so make you it as heavier stings on it.

The paint on this guitar is down right awsome. I even dropped it and i picked it up with not even a scratch. Its very well made and has a great finish to it and has a sweet rock style to it.

Well overall this guiar is great! its a great guitar at a great price i highly recomed you guys to look into this one.

Jackson JS20 Dinky
3
I bought the guitar from a local music shop for $250. I wanted a back up hard rock axe.

I like the design. The electric blue finish is impressive. The fretboard is nice and flat.
The tuners are well made.

The single coils are nothing to write home about. The tremolo is OK, nothing special.

The construction is adequate. It's what I'd expect for the money. I spent nearly three days setting it up, which ws a pain. But now it plays fine.

This guitar ain't bad. I use it alot for home recording and pre production.

I like its shape, first of all, but of course it isn`t the most important thing. I use it with a Hughes&Kettner amp and I use a Boss MT-2 and an Electroharmonix Big Muff, and when I swith between pickups, it can be heard very nicely. The volume adjustment is quite smooth, as well. The guitar has a surprisingly clear and wide sound.

It's the pickups. The screws often loosen, and I have to adjust them almost every week, because they sink in the body, causing volume decreasing. It`s really embarrassing. On the neck, it's quite rough to play on, though I don't say it would be impossible to get used to. The volume adjuster gets loosen often, as well. It is a pity that the whole thing lacks stability.

Good sound among cheap guitars, that's what I think about the quality, it was worth it, but the physical attributes are weak. All the screws loosen too quick.

This review was originally published on http://www.musicgearreview.com
Did you find this review helpful?yesno
»
Read the 15 user reviews on the Jackson JS20 Dinky »